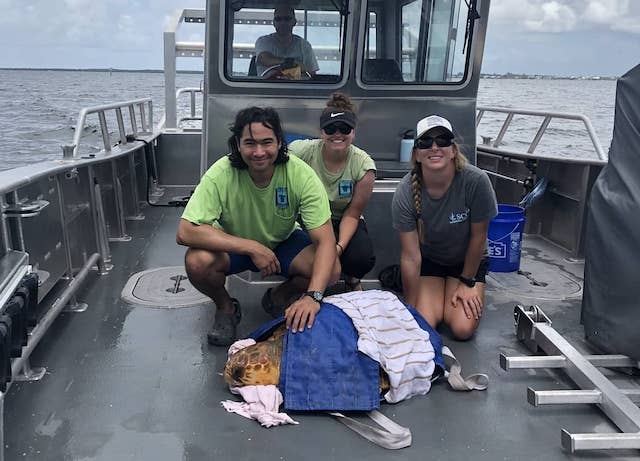 CAPTIVA, Fla. (August 22, 2019) – The Clinic for the Rehabilitation of Wildlife (CROW) released a sub-adult loggerhead sea turtle at the South Seas Resort on Captiva after it was rehabilitated for buoyancy issues. 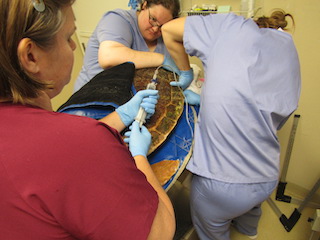 The turtle was rescued on August 9 after the Sanibel-Captiva Conservation Foundation (SCCF) Sea Turtle Hotline received a call from a local charter boat captain who had observed it struggling to dive near Redfish Pass. The captain and his charter guests helped pull the loggerhead into their boat and then met up on the water with SCCF staff who transferred it onto the R/V Norma Campbell, SCCF’s research vessel.

The turtle was taken to CROW, a licensed sea turtle rehabilitation hospital, to receive medical treatment. Veterinarians observed the turtle in a rehabilitation tank and diagnosed the problem. It was having trouble submerging due to air trapped inside it’s body cavity, likely a result of the same incident that left the turtle missing part of its shell. Using ultrasound, the team was able to locate the air pocket and extract over four liters of air. Shortly after the procedure, the turtle was able to easily dive to the bottom of the tank (Read More about the turtle's rehabilitation here). After another week of care and observation to ensure the air pocket did not return, the turtle was cleared for release.

Thanks to the charter captain’s early identification of the problem, the swift action of SCCF staffers and the expertise of CROW’s veterinary and rehabilitation staff, the turtle is now back in the Gulf of Mexico with a new lease on life.