We are deeply saddened by the passing of E14 of the Southwest Florida Eagle Cam overnight. We are working closely with US Fish and Wildlife to pursue the possibility of recovering the remains to perform a necropsy and determine a cause of death. We will provide updates as more information becomes available 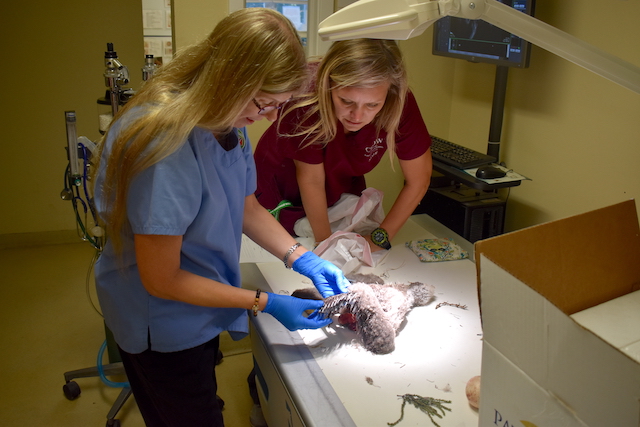 Update on E14 passing: This afternoon (January 15), a CROW staff member removed the remains from the Southwest Florida Eagle Cam nest and brought them to CROW. The unhatched egg was also removed from the nest.

A radiograph was taken of the body which did not reveal any foreign objects, such as a fishing hook, in the body of E14 and the staff member that retrieved the remains did not find any fishing hooks or line in the nest.

A brief examination was performed by veterinary staff in which they noted the entire left side to be covered in blood which appears to have come from a broken blood feather on the left wing. No other traumatic wounds were found to have occurred prior to the eaglet’s passing.

The remains of E14 have been sent to the Southeast Cooperative Wildlife Disease Study (SCWDS) at the University of Georgia for further evaluation and testing, including testing for rodenticides that may have contributed to the eaglet’s death. It will take some time before we receive the results, but we will be sure to share them once they are available.