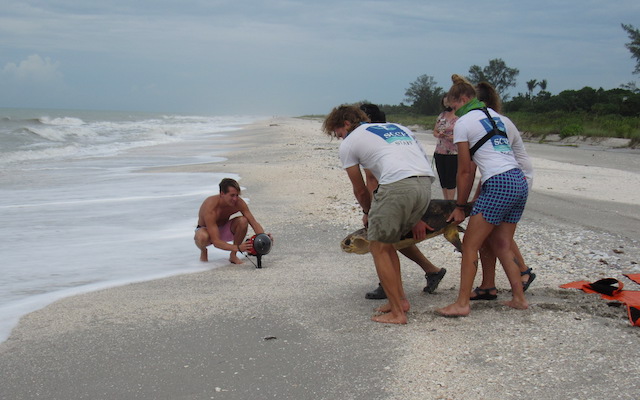 SANIBEL, Fla (September 16, 2020) – On Tuesday, September 15, a sub-adult loggerhead sea turtle was released on the beach along West Gulf Drive on Sanibel by staff members of the Sanibel Captiva Conservation Foundation (SCCF) after spending nearly a month recovering at the Clinic for the Rehabilitation of Wildlife (CROW).

CROW sees nearly 200 different species of native and migratory wildlife admitted to its hospital each year, including three different species of sea turtle. As the only licensed sea turtle rehabilitator on the west coast between Sarasota and the Florida Keys, CROW’s hospital typically admits 12 to 20 sub-adult or adult turtles a year and dozens of hatchlings.

On August 18, the sub-adult loggerhead sea turtle, weighing 55.6 kilograms (122 pounds), was rescued from the surf by SCCF staff near Beach Access #5 on Sanibel as it was washing ashore. The turtle was missing its right front flipper, but this appeared to be an older injury that had already healed. Veterinarians performed a full exam including bloodwork and radiographs. The turtle was found to be dehydrated and under weight along with copious amounts of barnacles on its shell, underside and mouth. The turtle was also anemic which may have been a result of the traumatic injury or other environmental factors. 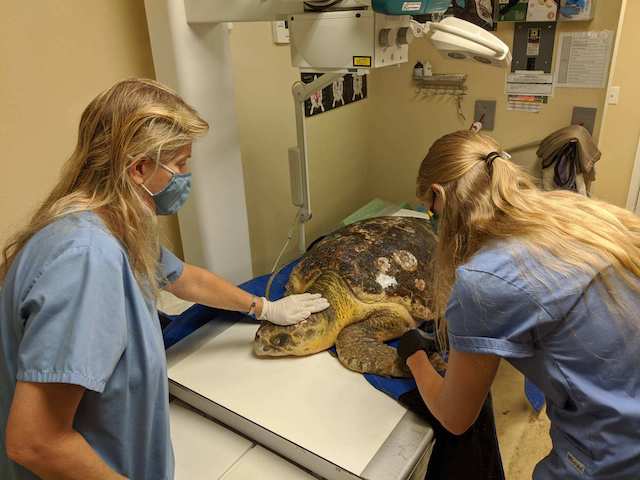 The veterinary team provided the turtle with subcutaneous fluids, iron and B12 supplements, and antibiotics to treat any lingering infection that may have been present from the traumatic injury to its flipper. It was then transferred to an outdoor rehab tank filled with freshwater which helps with hydration and kills off barnacles growing on the shell. Over the next few days, the water was transitioned to brackish water and then pool salt was used to gradually match the salinity of seawater.

“The turtle began eating just a few days after being admitted, unlike many of the turtles that we see,” says Rehabilitation Manager Breanna Frankel. “Our main concern was that it was undernourished and its willingness to eat helped it gain weight.”

Getting a sea turtle to gain weight is no easy (or cheap) task. A loggerhead turtle will eat two to three percent of its body weight in squid and fish each day. For a turtle weighing over 100 pounds, that’s a lot of food! Thanks to generous donations from Whitney’s Bait and Tackle Shop, the turtle also enjoyed blue crabs, one of it’s favorite foods, while at CROW. 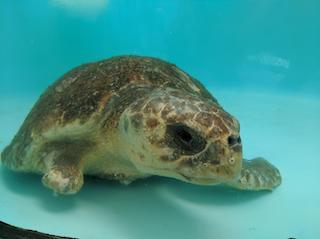 “It is important that we provide a variety of foods for the turtles in our care to ensure they get the right nutrition to help them recover,” says Frankel. “At the time of release, the turtle had gained more than 10 kilograms (22 pounds).”

In accordance with marine turtle permits, the loggerhead turtle was tagged with a flipper tag and passive integrated transponder (PIT) prior to release.

About Clinic for the Rehabilitation of Wildlife (CROW)

Established in 1968, the Clinic for the Rehabilitation of Wildlife (CROW) is a teaching hospital saving the sick, injured and orphaned native and migratory wildlife of Southwest Florida and beyond.  Through state-of-the-art veterinary care, public education programs and an engaging visitor center, CROW works to improve the health of the environment, humans and our animals through wildlife medicine. For more information, or to plan your visit, go to www.crowclinic.org. If you find an animal that is in need of help, call (239) 472-3644 ext. #222.