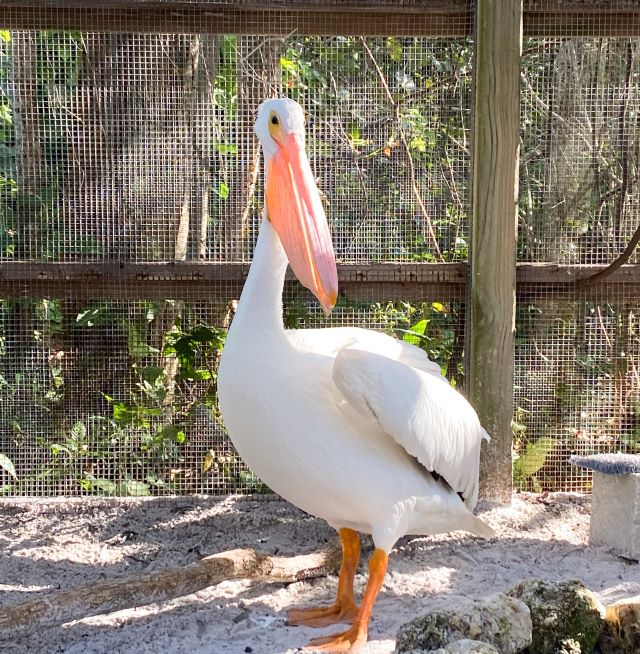 The white pelican (Pelecanus erythrorhyncho) is a large aquatic bird with a hefty bill and an oversized throat pouch. White pelicans spend a lot of time on the water and nest on isolated islands in lakes, rivers or bays.

At CROW, an adult female white pelican was admitted from Sanibel where it was found floating just off Picnic Island between Sanibel and St. James City. It was reported that the bird could not fly and did not appear to have mobility in her legs. Upon examination, the pelican was not responding to visual stimuli and had limited use of the legs – both indications of possible red tide poisoning.

“Given the patient’s response to IV fluids, injectable lipid therapy which provided calories/nutrients and reversed neurologic/cardiac toxicity and supportive care, we feel fairly confident that this animal was suffering from brevetoxicosis – red tide poisoning,” confirmed Dr. Sasha Troiano, CROW veterinary intern. She reported that CROW sees roughly 400 red tide cases annually and took in 100 cases of the toxin illness in the past couple months.

In addition, the pelican had lacerations and a severe parasite infestation in her pouch. The pelican was given IV fluids,oral medication and placed in supportive care.

“The pouch laceration was old and already healed, and likely completely unrelated to the reason for admittance,” said Dr. Troiano. “White pelicans are susceptible to many different parasites, both internal and external. Oftentimes, there are low levels of infestation even in healthy animals, but if an animal becomes debilitated, these levels can increase, causing secondary issues. It is likely that the feather lice and pouch lice burden was heavier in this bird due to the brevetoxicosis.”

Five days after admittance, staff noted that the patient was still not eating voluntarily, but was tolerating assisted feeding well and gaining weight. Later that same day, the pelican was found lying down and had regurgitated her food. Veterinarians suspected the cause was a rare, but potentially life-threatening reaction to one of the medications, leaving her in critical condition. The staff’s quick action helped the pelican get back on the road to recovery and, two days later, she had recovered from the suspected drug reaction.

“We suspect this pelican had an individualized adverse reaction to the deworming medication it was given,” said Dr. Troiano. “Adverse drug reactions can develop unpredictably in susceptible individuals and do not occur at any dose in most patients, making these reactions essentially impossible to predict. Pelicans often have a variety of gastrointestinal parasites and, once they are stable, we deworm them to lessen the worm burden. If the worm burden is high enough, or the patient is not stable/ well hydrated, as the worms die, they can sometimes cause gastrointestinal obstruction, which is a serious complication. This usually occurs in 24 to 48 hours after deworming. In this case, the neurologic reaction was within an hour or two of drug administration, which has not been reported in literature. Adverse drug reactions can occur in any species with any medication.”

Four days later, the white pelican was eating well on her own and was moved to an outdoor enclosure to continue herrecovery. “The patient is doing very well and is currently continuing rehabilitation in an outside enclosure,” said Dr. Troiano. “The pelican is eating well and continuing to gain weight. It will be released once it is in a better body condition.”