The white ibis (Eudocimus albus) is a long-legged water bird that is almost exclusively white in color save for the reddish pink bill, legs and bare skin around its eyes. It has a long curved bill and a long neck that it curls when foraging and straightens out in flight.

These wetland birds are found in coastal or inland habitats. They usually forage in shallow areas with less than a foot of water, but you can also find them digging on your lawn or park grasslands.

University of Miami sports fans are familiar with the white ibis. That’s because it is the Hurricanes’ mascot, which is affectionately called Sebastian the Ibis. Interestingly, university officials reportedly chose the white ibis for its heroic ability to withstand hurricanes. 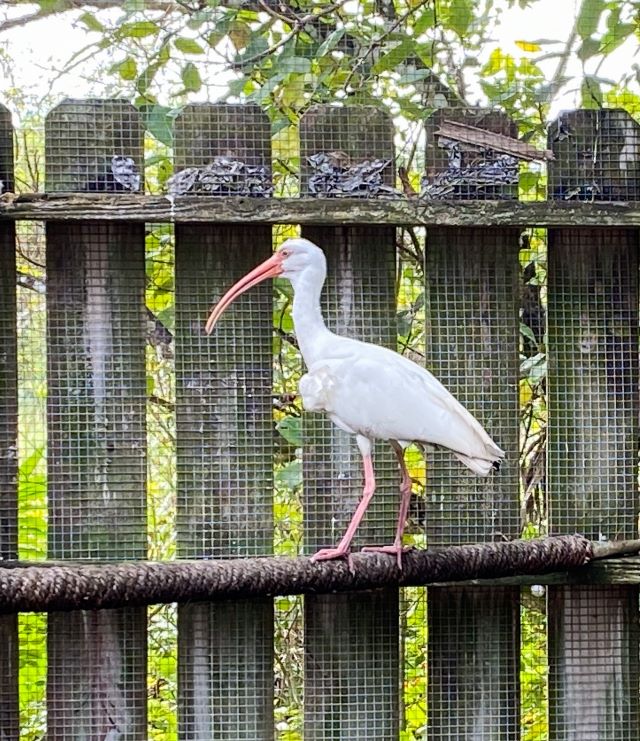 At CROW, an adult white ibis was brought into CROW from The Sanctuary Golf Club’s course on Sanibel after being struck by a golf ball. Upon examination, the ibis was found to have blood in its mouth, esophagus and windpipe. The patient was unable to support its own head, but the ocular exam was surprisingly normal.

“The eyes of a bird take up a large portion of their skull compared to mammals; therefore, if any head trauma occurs, there is often trauma to the eyes so we always do a complete eye exam on trauma cases. This includes looking at the cornea or surface of the eye, as well as the front and back chambers of the eye,” said Dr. Robin Bast, CROW staff veterinarian. “This ibis luckily had no abnormalities on its eye exam.”

CROW medical staff concluded that the golf ball had done damage to the head, windpipe (trachea) and esophagus. The patient was placed on pain medication, an anti-inflammatory medication, fluid and nutritional support, according to Dr. Bast. It was closely monitored.

“We typically house them in an oxygen cage and, if they’re unable to stand, then we elevate their head up above the rest of their body in an attempt to prevent increased pressure and swelling around the brain,” she said.

The ibis was noted to be uncoordinated and slightly neurologically inappropriate, which is consistent with head and spinal trauma from being hit with a golf ball. Over the next several days, the patient improved in supportive care, displaying minor head tremors, better coordination and an appetite coupled with the ability to self-feed. The water bird was fortunate that the injury was not worse.

“It depends on the severity of the trauma and amount of swelling or bleeding around the brain. Head trauma can be fatal in some cases; in other cases, patients gradually improve over several days to weeks,” said Dr. Bast.

The patient was placed in outdoor and indoor supportive care to monitor progress as it was still easily stressed.

“Patients are housed in quiet enclosures with a visual barrier to prevent them from seeing their human caregivers,” said Dr. Bast. “We can also give anxiolytic medications orally to help reduce their stress level while inside the hospital. The white ibis improved from its neurological issues, including the threat of spinal trauma. “After a couple days, this patient was standing but remained uncoordinated. Over a couple weeks, its neurologic signs gradually resolved” said Dr. Bast. “It was moved to an outdoor enclosure for more mobility – walking, flying.”

After 15 days in care at CROW, the patient was successful released into the wild on January 29.