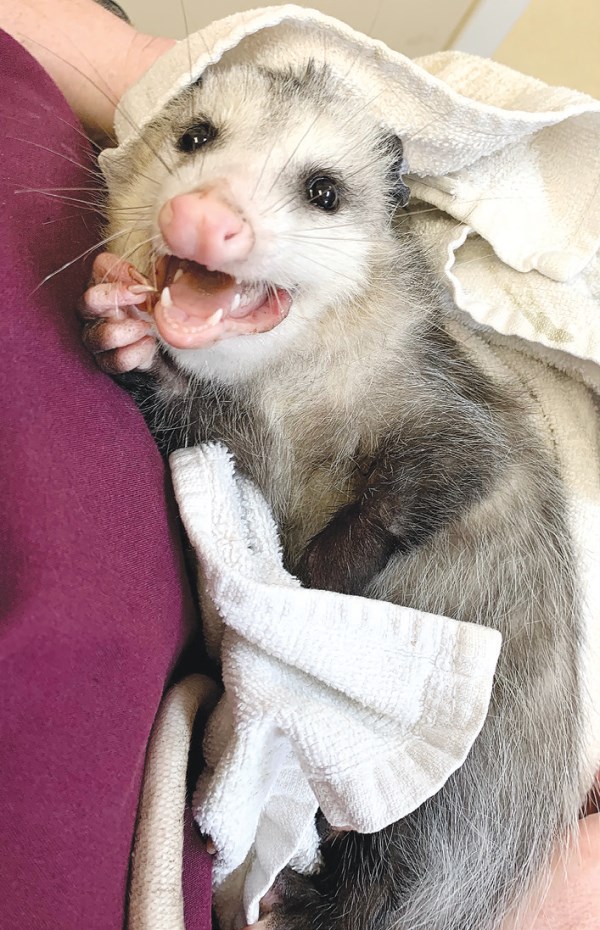 The Virginia opossum (Didelphis virginiana) is a catsized mammal that is mostly found in North America. In fact, it is the only species of opossum found north of Mexico.

The Virginia opossum is the continent’s only marsupial, an animal with a pouch, like a kangaroo or a koala bear. This nocturnal, omnivorous animal has been around for at least 70 million years and is called one of earth’s oldest surviving mammals.

At CROW, a juvenile male Virginia opossum was admitted after being found with its left paw caught in a rat trap in Cape Coral. Upon examination, there was marked edema and soft tissue swelling of the left paw and forelimb.

"The metal part is released and comes down with enough force to break their neck,” said Dr. Laura Kellow, CROW’s veterinary intern. “In this opossum’s case, when his leg was trapped in the rat trap, the metal part came down on his antebrachium – his forearm – and despite his struggles, he was unable to free himself.

“What this compressive force from the rat trap caused was essentially a tourniquet which prevented blood and lymph from flowing back up the limb. This allows fluid to escape the vessels and pool in the local tissues, which is called edema.”

Radiographs showed no evidence of any fractures, but staff was unable to rule out any fractures to the growth plate.

“The opossum is a juvenile, which means that his bones are still growing. Long bone growth occurs along physes, also called growth plates, which are cartilaginous and often the weakest part of the bone,” said Dr. Kellow. “Sometimes, if there is a fracture that is only in this cartilaginous growth plate, all we see on radiographs is widening or narrowing of this physis. This can be difficult to interpret even though we obtain multiple views.

“The (computed tomography) CT (scan) would help significantly in being able to interpret these changes. In this case, we are continuing to monitor him for limping and other clinical signs and would repeat x-rays if these occurred.”

The opossum has been receiving physical therapy to improve blood circulation.

“The opossum received medications to help improve blood flow and circulation to his limb, in addition to anti-inflammatory pain medication and antibiotics,” said Dr. Kellow. “Gentle massage and heat packing of the limb were also well tolerated.

“The swelling improved dramatically in the first few days and, with therapy, the limb is almost back to normal.”

The patient’s next steps in recovery will hinge on its future blood work.

“In the opossum’s struggle to free himself from the rat trap, he caused a small wound on the inside of his limb.

He has been receiving antibiotics for this, and when this has healed and his blood work is normal, he will be moved outside,” said Dr. Kellow. “There, we will be able to closely monitor his gait for limping and pain before release.”

That impending release should be sooner than later.

“He has already made dramatic improvements, and we are hopeful that he will be released in the next couple of weeks,” Dr. Kellow said.

The opossum’s pain and suffering could have been avoided.

“Snap and glue rat traps are inhumane and often prolong suffering and pain of rats/mice, not to mention other animals that may accidentally be caught. We also see many rodenticide cases yearly in our raptor patients, and even clinically unaffected raptors have high levels in their tissues on necropsy,” said Dr. Kellow. “There are many humane alternatives to snap rat traps, glue rat traps and rodenticides that avoid suffering, and we encourage the public to think critically about pest control and unintended effects on wildlife.”