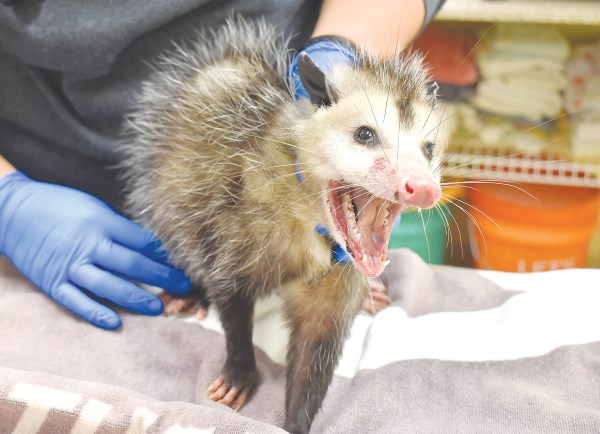 The Virginia opossum (Didelphis virginiana) is North America’s only marsupial – an animal with a pouch, like a kangaroo or a koala. It is a solitary and nocturnal animal about the size of a house cat.

Sporting a long head, pointed snout, rounded naked ears and a scaly, nearly hairless tail that has the capability of grasping objects much like a monkey’s tail, the Virginia opossum is regarded as one of the oldest surviving mammals on earth with a history that exceeds 70 million years.

A female Virginia opossum may have as many as 25 babies, but she averages seven or eight. Opossums have a lot of babies to insure that some of them survive. These babies are tiny when they are born, reportedly about the size of a navy bean.

At CROW, an adult female Virginia opossum was admitted after being found in the middle of the road in Fort Myers acting dazed and bleeding from its face. On intake, the opossum was alert and growling, with a reasonable body condition. The marsupial had a small laceration on the lip and tongue as well as a broken tooth. There were at least five joeys in her pouch. Fluids and anti-inflammatories were given and the opossum was cleared for release two days later.

In a four-day span, two other Virginia opossum mothers were also admitted with similar injuries. Both of these opossums were also found in the road with minor injuries to the face or head and had joeys in their pouches.

According to Dr. Mariah Lancaster, CROW veterinary intern, the joeys in all three cases were less than one month old and did not sustain any injuries. “All three female opossums sustained head trauma,” she said. “However, none showed signs of trauma to their abdomen or pouch region.”

The three patients, who were all released within a three-day period last week, were from different neighborhoods, with the second two admitted from Cape Coral. “This is the time of year when most female opossums will be carrying young in their pouch and are more active as they forage for food,” said Dr. Lancaster. “This means that any female opossums presented to CROW will likely have joeys.”

According to PBS’ NatureWorks, after birth, Virginia opossum babies climb up their mother’s fur and into her pouch where they find a teat. Those that do not find their way to the pouch will most likely die. If they make it to the pouch, only babies who find one of the 13 teats will survive.

“Joeys remain inside the pouch for about 50 days, after which time they begin to exit the pouch and spend time on their mother’s back,” added Dr. Lancaster. “Opossums breed and give birth to up to two litters of four to eight young – or joeys. The gestation period of an opossum is about 13 days.”

The delicate young opossums were lucky to be spared from injury or possibly death. “The joeys are small and soft skinned, with eyes and ears closed in the earliest weeks,” said Dr. Lancaster. “If the mother sustains severe trauma, or significant trauma to the pouch, the joeys are likely impacted as well.”