The swallowtailed kite (Elanoides forficatus) is a large but slender raptor that has narrow pointed wings, a white head, a black backside and a deeply forked tail, which helps in its buoyant flight style. This species of kite is so named due to its tail’s configuration, one that resembles that of a swallow.

The swallow-tailed kite is a sight to see while it is soaring in the air and on the hunt. Much like an aerobatic aircraft, this bird can turn on a dime by 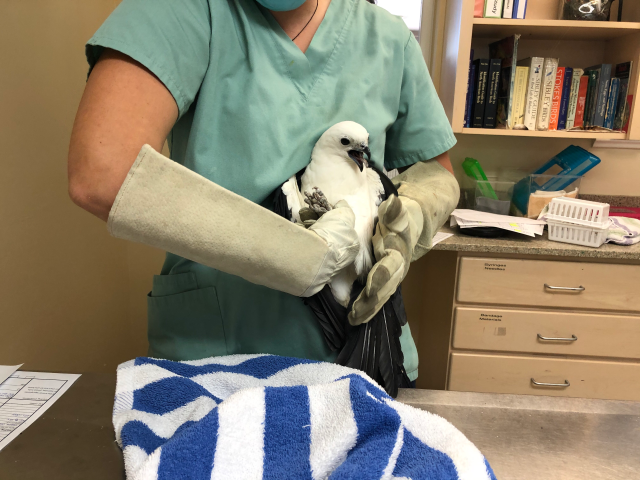 flicking and rotating its tail. By doing so, it can divert from a straight course to a tight turn in a quick and precise motion. It further shows off its aerial acrobatics by rolling and diving backward in pursuit of an insect or other prey.

This migration bird stays in the southeastern part of the country throughout the summer, before leaving and migrating to South America. A second subspecies of the swallow-tailed kite is native to only Central and South America.

At CROW, an adult female swallowtailed kite was admitted after she was found flapping her wings but not flying while being attacked by eagles. Upon presentation, the patient was quiet but alert and no fractures or areas of swelling were found. Radiographs revealed a large, shelled egg.

“On intake, a quick awake radiograph was performed to rule out any obvious abnormalities such as fractures. The radiographs showed no musculoskeletal abnormalities, but there was a well-shelled egg in the coelom,” said Dr. Sasha Troiano, CROW veterinary intern.

Veterinarians found the patient to have a systemic disease as indicated by abnormal bloodwork indicative of infection.

“The complete blood count (CBC) that measures red blood cell, white blood cell and platelet levels showed moderate abnormal cells, indicative of underlying infection or disease. There were also some puncture wounds found on the left axilla – ‘armpit region’,” said Dr. Troiano. “It is possible that the changes on bloodwork are due to the puncture wounds, or that the patient was already suffering from a systemic disease and subsequently was attacked because she was already debilitated."

“The bloodwork abnormalities are being treated with antibiotics, and a CBC will be repeated in a couple days to assess response to the medication,” Dr. Troiano said.

CROW veterinary staff suspected the patient may have been egg bound due to an inability to pass the egg, which was secondary to disease. The patient was given fluids and remains under close monitoring.

“The patient was given injectable sedation, and lube was instilled in the vent to help ease passage of the egg,” said Dr. Troiano. “The patient is being treated with antibiotics and supportive care. She will be treated until her bloodwork changes have resolved.”

The swallow-tailed kite was successful in passing the egg.

“She passed the egg shortly after intake, after receiving sedation and lubrication. She is currently receiving supportive care,” Dr. Troiano confirmed.

The kite is still under CROW’s care and will be until her bloodwork bounces back.

“The patient is bright and alert and has started eating on her own,” said Dr. Troiano. “She will be kept on medication until her bloodwork has returned to normal, at which time she will be conditioned prior to release."