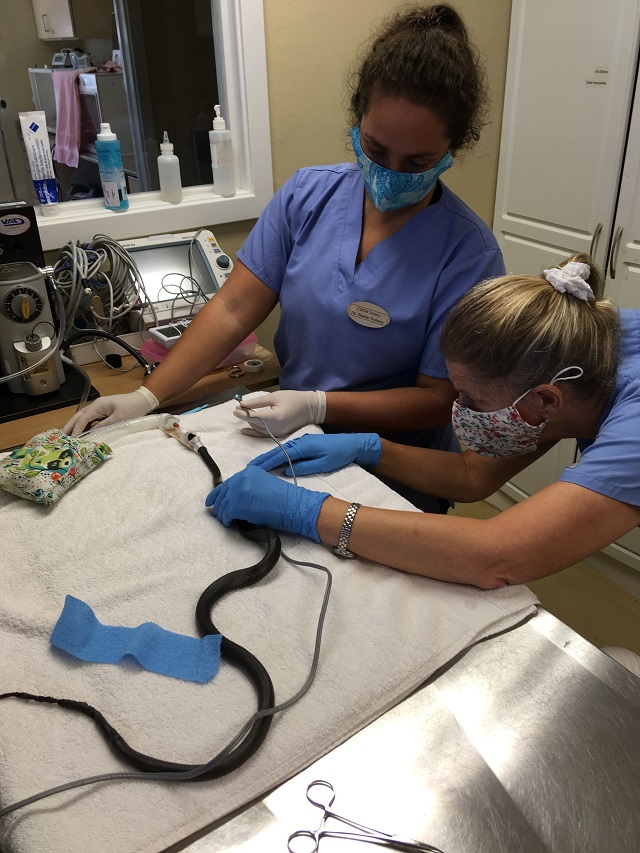 The southern black racer (Coluber constrictor priapus) is a non-venomous snake that is active during the day and, thus, one of the most frequently seen snakes in the state. Its jet-black upperparts and its ability to move quite fast with agility gives it its name.

The black racer likes to hang out by water where its prey, including rodents, frogs, toads and lizards, are plentiful. While its bite is nontoxic, it does defecate a foul-smelling musk – like most snakes against predators – when on the defense.

At CROW, an adult black racer was admitted from Sanibel after it was reported to have been hit by a lawn mower. Upon further examination, veterinarians found the snake had a fracture on its spine close to its tail, as well as multiple cuts near the fracture. The patient was treated with anti-inflammatory and pain medicine and was scheduled for surgery to amputate the tail.

“The necrotic wounds, in combination with the fracture, were severe enough to require amputation,” said CROW Rehabilitation Manager Breanna Frankel. “The spinal fracture is actually above the amputation site and was not removed in surgery. The spinal fracture looks slightly displaced, like a little kink in the snake’s back but has not affected its overall ability to be healthy in the wild.”

After the procedure, the snake’s amputation site appeared to be healing well.

“With any surgery, there is always risk for infection following surgery. The tail amputation site was cleaned and bandaged daily for the first couple days as it started to heal,” said Frankel. “There has been no discharge from the surgical site to indicate any type of infection. The amputation site closed nicely and has shown no signs of dehiscence – the edges bursting open – or inability to hold the incision closed. 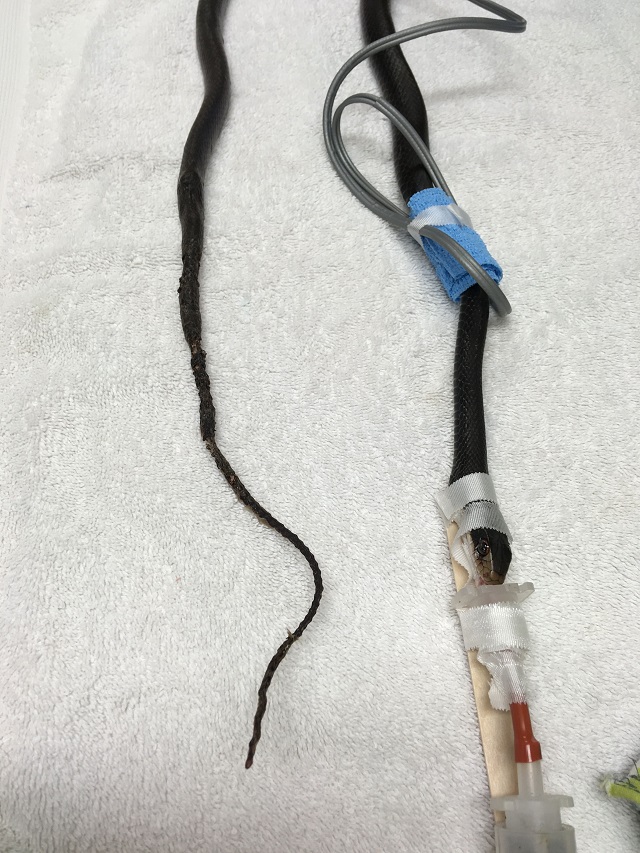 “The multiple cuts were part of the amputation surgery, they were necrotic wounds likely a few days old that did not receive proper care immediately following the injury,” Frankel said.

She said snakes cannot regenerate body parts. It is noted that a snake’s important organs are located in the front third of its body, so losing a tail would not leave it disabled.

“Unlike starfish and some lizard tails, this snake’s tail will not grow back. This snake does not require the end of its tail to survive in the wild and complete all biological functions so, once it heals, it should be ready for release,” she said.

After two weeks in care, the patient was reported to be bright and alert and is being monitored for any signs to indicate that it may be in pain.

“Of course, after any traumatic injury, there is associated pain. The snake hasn’t shown outward signs of pain aside from trying to bite everyone who tries to get it out of its enclosure, which could just be due to the fact that this type of snake is a little more bite-happy than the other species we see,” said Frankel. “It did not like having its tail touched prior to surgery but has been very active and aggressive ever since.”

A release schedule has yet to be determined.

“We will monitor until the amputation site closure is healed enough to survive in the wild and then release if all other diagnostics, like blood work, come back clean,” said Frankel.