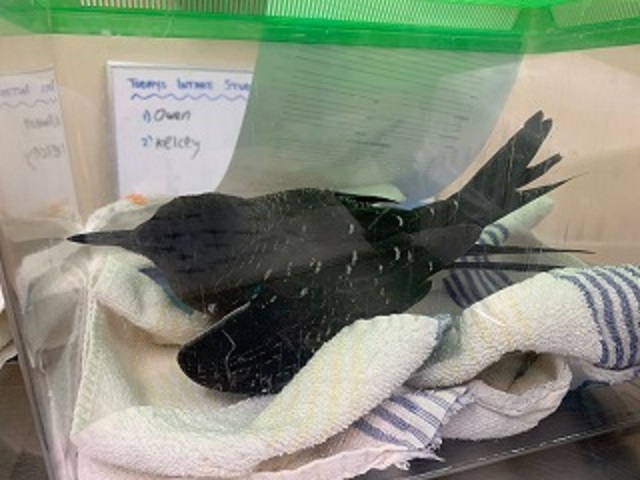 The sooty tern (Onychoprion fuscatus) is a tropical seabird that “sleeps on the wing,” meaning that it can literally fly with its eyes closed. It nests on sandy islands but normally stays far offshore.

At CROW, a sooty tern was admitted from St. James City. Upon examination, the tern was extremely thin and dehydrated. Since these birds are pelagic, it is rare for them to be seen on land. CROW officials suspect that the bird’s weakened state caused it to be blown ashore by the recent hurricanes in the Gulf of Mexico.

“Pelagic or seabirds live out at sea and typically only return to land for breeding or for nesting purposes. For this reason, they are typically only presented to the hospital when they have been injured or become systemically ill,” said Dr. Robin Bast, CROW’s staff veterinarian.

After the patient was stable enough, a blood sample was taken that revealed it was slightly anemic, and radiographs showed visible air sac lines.

“This bird was allowed to rest in a cage with a heat lamp and given subcutaneous fluids to stabilize it. After two hours, we were able to obtain a blood sample. Radiographs were taken the next day once the bird was deemed stable enough for anesthesia,” said Dr. Bast. “Air sac lines are white lines visible in the respiratory system on x-rays – normal lungs in a bird should be black on x-rays. This can indicate inflammation or infection – bacterial or fungal in nature – within the respiratory system. Bacterial air sacculitis is treated with broad-spectrum antibiotics. Fungal air sacculitis is more difficult to treat and cure, and requires anti-fungal medications like Itraconazole. This patient received both antibiotics and anti-fungal medications.”

The patient was started on a refeeding plan and was given fluids and antibiotics.

“Since this patient was very thin, it had to be slowly re-fed to prevent ‘re-feeding syndrome,’ which can cause life-threatening electrolyte imbalances as the bird’s metabolic state shifts,” said Dr. Bast. “We typically start with a liquid, easily digestible critical care formula based on their typical base diet. For fish-eating birds such as this one, we use LaFeber’s Piscivore care, then transition to Mazuri Fish analog (dried fish meal), and then offer whole fish such as smelt.”

Since intake, the tern has improved, but will need to gain more weight and strength before being evaluated for release.

“This bird weighed 110 grams on admission to the hospital. Today, it weighs 145 grams and is eating on its own. It will need to gain back body condition or strength in its flight muscles prior to release, and should weigh closer to 180 grams by the time it is ready for release,” said Dr. Bast. “It needs to be a normal weight and have good, strong flight muscles and display the ability to fly normally in an outdoor enclosure. Currently, this patient is still in ICU receiving medications. Once its medical treatments have been completed, it will be moved to an outdoor rehab enclosure to encourage exercise and build strength back up in its flight muscles.”

The patient is making progress with its health and moving towards different living conditions.

“This bird continues to improve with supportive care, antibiotics and antifungal medications. It’s most recent bloodwork and x-rays show improvement,” said Dr. Bast. “We expect to move it to an outdoor enclosure within the next week to begin the next phase of its rehab process.”