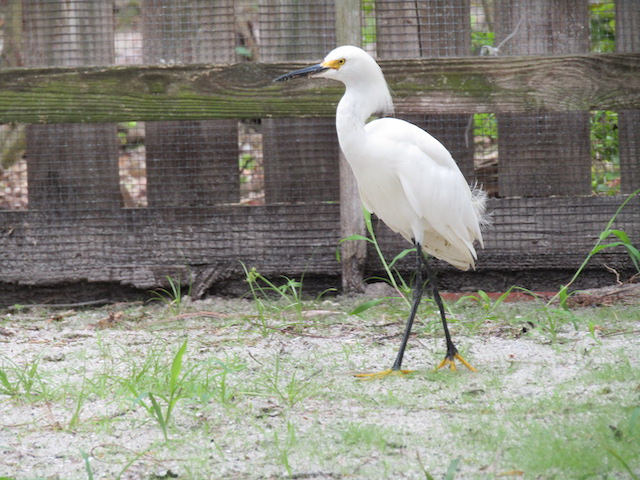 For reference reasons, the snowy egret (Egretta thula) can be called a small white heron. This nearly pure white bird is known to be elegant and slender, with black legs and bright yellow feet when mature, or green-yellow feet when immature.

Much like similar shorebirds, snowy egrets wade in shallow water to spear fish and other small animals. They engage in either a patient, motionless approach, or an animated technique that involves running back and forth with their wings spread while chasing their prey.

Interestingly, history buffs state that snowy egret plumes were valued at twice as much as gold in 1886 due to the demand for their beautiful feathers in the fashion industry at that time. In fact, plume-hunting nearly killed off this shorebird species.

At CROW, a juvenile snowy egret was admitted after being rescued near Lovers Key State Park with fishing hooks in its body. The egret had wounds from the fishing hooks on its left leg and left wing. The injuries to the left leg had caused the bird to refuse to put any weight on the leg and “knuckle,” and drag the leg when it walked.

“It was found entangled with two hooks on it, one through the skin of the left wing and one at the left knee,” said Dr. Robin Bast, CROW staff veterinarian. “Instead of being able to place the foot normally, with the toes flat against the ground, this patient had the toes curled under or ‘knuckled.’ This can be a result of pain or nerve damage. This change can be temporary or permanent, depending on the nature of the injury.”

Veterinarians treated the wounds, provided pain medication and placed a bootie on the left foot to open the toes.

“We have to get creative to treat our patients. We cut a piece of foam pool noodle to match the shape of the bottom of the foot and taped it in place,” said Dr. Bast in describing the makeshift foot brace. “It functions similar to a splint, holding the foot in a normal anatomic position while we treat the underlying cause.

“Holding the toes in normal position prevents the bird from injuring the toes by abnormally bearing weight on the wrong side of the toes. It also helps prevent muscle and tendon contracture.”

After less than a week in care, the egret was noted to be standing and bearing weight on its left leg.

“After a few days of antibiotics and pain medication, the wounds were healing well. The shoe splint was removed and the patient was able to stand and walk normally with no evidence of lameness,” said Dr. Bast. “It was moved to an outdoor enclosure, where it passed a flight test, and was subsequently released on Friday, April 24.”

Luckily, the patient did not penetrate the fishing equipment more into its body. Some animals understandably are frantic when they are hooked and can cause much more harm to themselves when thrashing about with hooks and monofilament line attached to or around them.

“Check out the collaborative program Mind Your Line for more information on reducing the impacts of hook and line related injuries on wildlife. These injuries range from entanglement wounds to ingestion and gastrointestinal complications,” said Dr. Bast. “This bird was lucky its injuries were treatable and it recovered quickly; not all animals survive encounters with hook and line. This problem is preventable if we take initiative to dispose of fishing gear appropriately.”

Anglers need to be responsible when fishing. Visit mindyourline.org for more information.