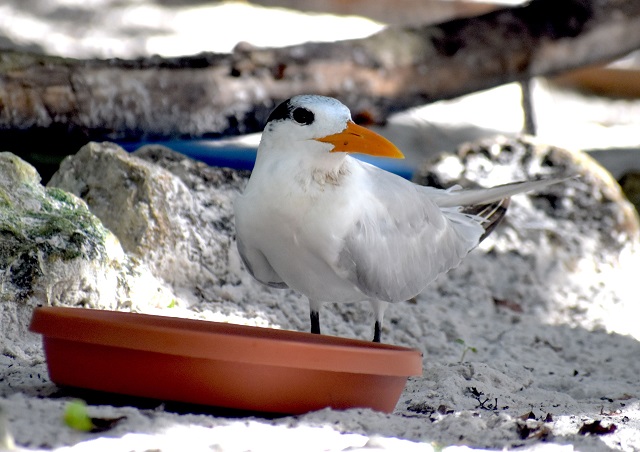 The royal tern (Thalasseus maximus) is known to be a shore hugger that is drawn to sunny islands unless pushed inland after strong storms. These seabirds are distinctive with bright dagger-like orange bills, shaggy black crowns, long forked tails and pointy wings.

Royal terns dine on fish that are swimming close to the water’s surface. They sweep in low, skimming water with their bills or dipping into the surface to pick up prey or floating scraps. They sometimes snare flying fish from the air, or snag food from other birds.

At CROW, a royal tern was admitted from Big Hickory Island in Bonita Springs because it was bleeding from its neck. Upon examination, the patient was found to have an approximate two centimeter laceration on the left side of its neck, and the bird was also underweight. While the wounds were flushed and sutured, it was undetermined as to how the injury occurred.

“It is hard to say for sure, but it is most likely that the wound was caused by some sort of predator attack or discarded fishing hook,” said Dr. Sasha Troiano, CROW veterinary intern. “There were no other wounds aside from the neck laceration seen on this patient.”

X-rays were taken to determine if there was any esophagus damage.

“On intake, this bird was stable enough to be anesthetized, which allowed us to take full radiographs and better explore the wound. There were no hooks seen on radiographs. Once the neck was cleaned up, it was clear that the laceration was through the neck skin, but did not appear to be affecting other important internal structures like the trachea or esophagus. The wound site was cleaned well, gently flushed, and the laceration was sutured closed. Once closed, no bandaging was required,” said Dr. Troiano. “The patient tolerated feedings well, leading us to feel confident that there was no esophageal involvement. 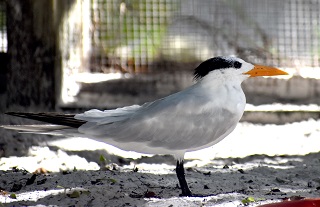 The patient was started on pain medication, antibiotics and a refeeding plan. Dr. Troiano detailed the latter.

“With injured or debilitated patients, it is important to introduce food gradually so as not to cause any electrolyte or metabolic disturbance. It is often difficult to tell for sure how long it has been since a given patient last ate,” she said. “With our shorebirds, we start with force feeding a liquid diet, then piscivore care… that is an easily digestible diet. We increase the percent body weight fed over the first day. Then, we progress to a fish analog or fish slurry, again a liquid diet for one day. Then we progress to whole fish. Sometimes this progression is extended over more than two to three days depending on the patient.”

The injury has not limited the movement of the patient, nor its appetite.

“This patient has been doing very well, and does not seem to be negatively affected,” said Dr. Troiano. “The bird began eating on its own shortly after it was first offered fish, and has continued to eat and gain weight.”

After five days of wound management care, the laceration was healing well. It was determined to move the patient to an outdoor shorebird enclosure.

“The patient is doing well outside, continuing to eat and improve waterproofing,” said Dr. Troiano. “The patient was not flying for the first few days outside, but has recently started taking some low small flights. It will be kept outside for continued rehabilitation until its body condition is good and it is flying well. At this time, it will be cleared for release.”