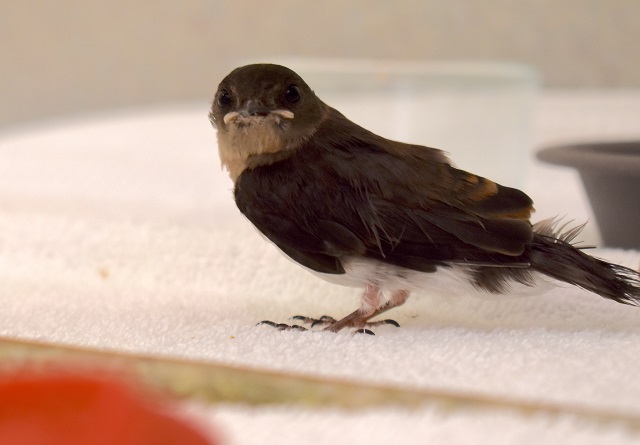 The northern rough-winged swallow (Stelgidopteryx serripennis) is among many different species of swallows and like birds. This small bird with a square tail has brown upper parts and off-white under parts. While many swallows nest in colonies, northern rough-winged swallows prefer solitary burrows or unnatural crevices such as gutters, drainpipes and bridges. They are great fliers that consume insects in mid-air. Their flight wingbeats are slower than most other swallows. Northern rough-winged swallows spend winters in Mexico or Central America. They get their name due to their tiny hooks on the edges of their primary feathers, and it reportedly takes them close to 100 days to finish growing new feathers.

At CROW, a northern rough-winged swallow was admitted last week along with three other individuals from other swallow species. The four birds were flown down from the Wildlife Rehabilitation Center of Minnesota (WRC).

“We received a nor thern rough-winged swallow, a cliff swallow, a barn swallow and a purple martin as part of this transfer,” said Dr. Robin Bast, CROW’s staff veterinarian. “We get patient transfers from northern facilities a few times a year, usually when a bird has missed migration due to injury or illness.”

The birds were receiving treatment for feather damages and, indeed, missed their species migrating out of the area. The northern rough-winged swallow came in with broken primary feathers on both of its wings.

“The swallows sustained feather damage as part of their initial injuries, so we are waiting for them to grow their feathers back out before they are released,” said Dr. Bast. “Some minor abrasions were found on the feet, pododermatitis, which have since resolved.”

Once enough of the broken feathers have molted out and new ones grow in so that the patient is able to fly appropriately, it will be released to an area where other wintering northern rough-winged swallows are present. “The swallows are currently in a softsided enclosure and go outdoors during the day. Many of them are already flighted, just waiting for the feather quality to improve,” said Dr. Bast.

CROW has a long relationship with WRC, though the transfer process is not a frequent one. “Yes, we have collaborated with them for several years now, and it is fantastic that we are able to work together to help wildlife even being so far apart,” said Dr. Bast. “This is not typical, we only get two to three transfers like this a year. If they missed migration due to an injury or illness that has been resolved, we can accept them as transfers and reunite them with a flock of their species down here. This gives them the best chance to make the next migration back north successfully if they are with others.

”The reciprocal transfer process is a lot less frequent. “Typically, birds are transferred to our warmer climate to avoid being wintered indoors and reunite them with their species sooner. We have not yet had to send a bird north, but thanks to a great working relationship with other centers like the Wildlife Rehabilitation Center of Minnesota, it is a possibility if necessary,” said Dr. Bast. “There is a lot that goes into coordinating a transfer including minimizing stress to the patient and ensuring it is not carrying disease to a new region.”