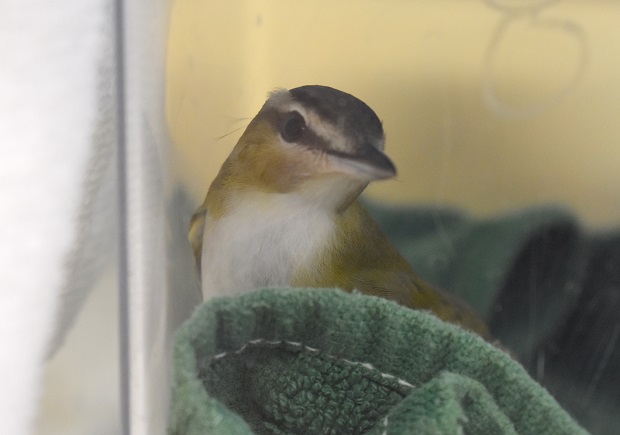 The red-eyed vireo (Vireo olivaceus) is a small songbird that gets its name from its red iris, which begins with a brown color at birth, then slowly moves to dull red before a more crimson color. This chirper is olive-green in color on the top side and white on its underbelly. It sports a gray crown with a blackish stripe across the eye area. Due to the color of their upper side, red-eyed vireos have the ability to hide in trees thick with green leaves. That suits them well since they like to slowly forage for caterpillars on upper or lower parts of leaves.

Red-eyed vireos are known as “tireless songsters” due to their persistent chirping when searching for a mate. In fact, someone actually recorded a vireo and counted more than 22,000 songs in a 14-hour period.

At CROW, a red-eyed vireo was admitted on September 9 after striking a window. The finder reported that the bird had blood in its mouth and an injured wing.

Upon intake, the bird no longer had blood in its mouth, but veterinarians noted a significant wing droop on its left side. Given the bird’s history of a window strike causing blunt trauma to the head and shoulder girdle, veterinarians suspected the bird might have a clavicle or coracoid fracture. Unfortunately, due to the small size of the bird as it weighed in at only 14 grams, veterinarians were unable to use radiographs to confirm the diagnosis. The bird was given pain medications and strict cage rest in hopes that the injury would heal on its own. 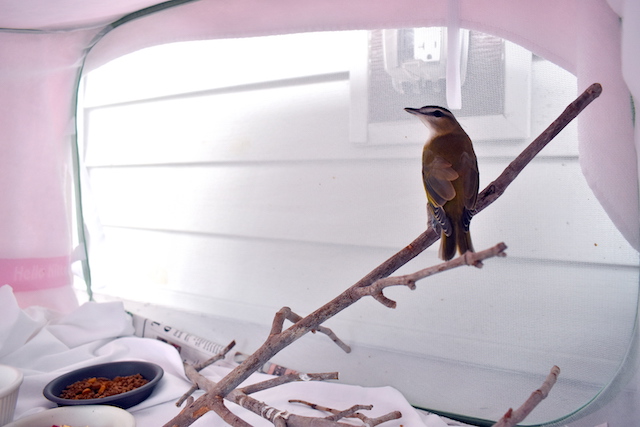 “A body wrap wasn’t necessary in this case since the wing droop was only mild, and cage rest was sufficient for the injury to heal,” explained Dr. Robin Bast, CROW staff veterinarian. “In general, tiny songbirds such as this one are difficult to get adequate images (from an x-ray machine) with the appropriate detail. On our machine, we can take sufficient images of slightly larger songbirds – such as blue jays and mockingbirds – with minimal issue.” After 11 days of rest, the bird was given a flight test and passed it. At times, patients just need time to heal wounds such as this one, according to Dr. Bast.

“Often with supportive care, pain medication and a period of rest followed by physical therapy, patients such as this may regain their flight ability,” she said. “Flight tests involve taking the patient to an outdoor enclosure and gently tossing it into the air to assess if it is able to fly, whether or not they can extend the wings fully or if a droop is noted after a period of exercise.”

The red-eyed vireo was successfully released on September 20 to continue its migration south for the winter. “Vireos commonly winter throughout the Amazon basin in a variety of habitats at elevations under 10,000 feet,” added Dr. Bast. “This little one has recovered enough to be released and is hopefully on its way to completing its long migration journey!”