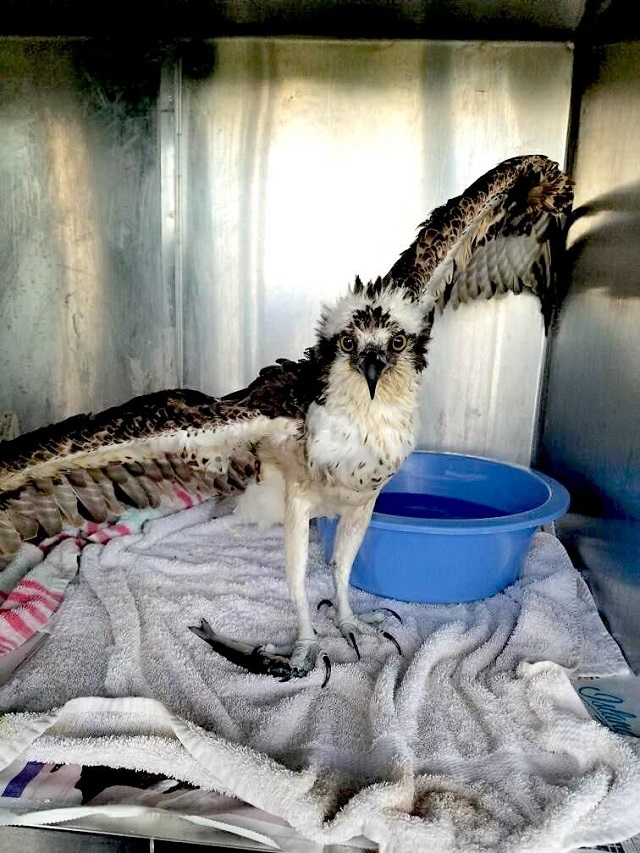 At CROW, a juvenile osprey was admitted from Fort Myers after it was reportedly attacked by eagles. Upon examination, the patient was very wet and was noted to have three deep puncture wounds on its chest. X-rays confirmed that the puncture wounds were consistent with eagle talons.

“Eagles tend to opportunistically scavenge food whenever they can, which sometimes includes stealing fish from an osprey’s talons,” said Dr. Robin Bast, CROW staff veterinarian. “Sometimes it’s due to territorial disputes such as getting too close to a nesting site, but fighting over a food item is more likely in this case.”

Initially, honey bandages were placed on the wounds due to their depth, but surgery was later elected to close the puncture wounds.

“Medical grade manuka honey has several advantages when it comes to fighting potential infection. It has anti-bacterial, anti-inflammatory and antioxidant components, and has an acidic pH which creates an environment not suitable for bacterial growth. We use it all the time in wounds until they start to scab over – or granulate in,” said Dr. Bast. “Due to the depth of the wounds and the involvement of muscle tissue, surgery was needed to clean and debride any obvious unhealthy or contaminated tissue away to prevent further infection that would delay healing. The muscles that were affected are important for flight, so it was important to close that tissue in addition to the skin.

“After the wounds were thoroughly cleaned, we placed antibiotic beads – which will provide a high level of antibiotics locally at the site of infection over the next four weeks – directly in the wound prior to closing it. The muscle was stitched closed, and then the skin was stitched closed to protect the underlying muscle.” 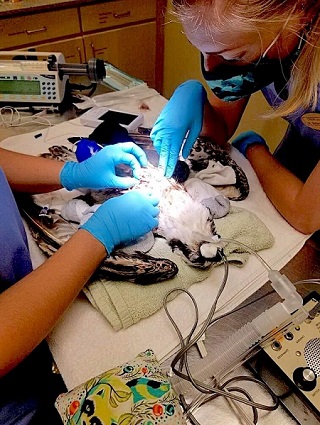 The patient is being treated with systemic antibiotics, which were initially injected through an IV catheter in the wing and now given orally in its food, in addition to the antibiotic beads, said Dr. Bast.

“Infection is the biggest concern for this bird – eagle talon’s have lots of bacteria on them, and the wound it created was very deep in the muscle, down to the keel or breast bone. We are continuing to monitor its bloodwork and x-rays to ensure the osprey is responding to this treatment.”

The patient continues to receive pain medication and antibiotics while the healing of the wounds is monitored closely.

“Due to the extent of the wounds, it will take several weeks for the muscle to heal fully. The skin should be healed within seven days,” said Dr. Bast. “As long as bloodwork shows no evidence of infection, the osprey will be moved to an outdoor enclosure so we can assess its ability to use those flight muscles that were affected on its chest. Time will tell if the muscle can heal well enough that this bird will fly again, but we are very hopeful it will be flying free – and hopefully avoiding eagles – again soon.”