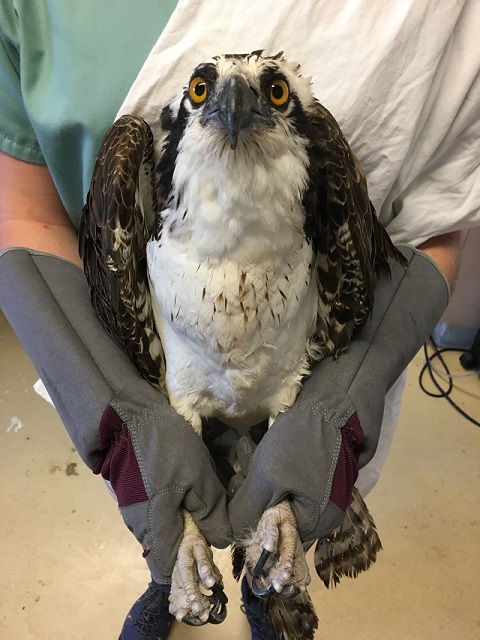 The osprey (Pandion haliaetus) is a large hawk that sometimes is confused for an eagle. Even though ospreys are sometimes called sea-eagles, eagles are mostly larger that ospreys and ospreys only dine on fish while eagles prey on fish, mammals and reptiles as well as other animals.

In flight, ospreys show off their strongly banded flight feathers that form an M-shape due to a marked kink in their wings. These raptors are often found near bodies of water and scan beneath surfaces before diving, feet first, to catch their next meal before soaring back to their nest with fish visibly seen in talons. According to studies taken, an osprey’s success rates in catching fish can be as high as 70 percent due to their ability to utilize four toes (two in front and two in back) on each talon. At CROW, an adult osprey was admitted from Labelle and was unable to fly. Upon examination, it was found that the bird had a right wing fracture with noticeable swelling and scabbing that caused a wing droop. The bird was immediately placed on a series of pain medications, anti-arthritics and anti-biotics.

“The unknown blunt force trauma that caused the fracture also caused the soft tissue swelling and the scabbing at the fracture site,” said Dr. Megan Cabot, CROW veterinary intern. “The anti-arthritic drug is an anti-inflammatory often used for arthritis, because arthritis causes inflammation. The anti-inflammatory drug was used to reduce painful swelling and inflammation at the fracture site.” A body wrap was placed on the right wing to encourage proper healing of the bone and reduce swelling.

Within a week of its stay, the osprey was relieved of the wrap’s restriction. “The body wrap has been removed to reduce rubbing and because the pain control is working well,” said Dr. Cabot. “The osprey is getting PT (physical therapy) every 48 to 72 hours to keep the elbow from losing range of motion.” A tail guard was placed on the bird’s tail feathers to reduce possible damage while the bird is on cage rest.

“Tail guards are placed to protect the feathers while the bird is in an enclosed space on cage rest,” said Dr. Cabot. “This is no longer necessary once the bird can be moved to an outdoor enclosure. Feather damage can increase time to release if it affects their flight ability, so it is important to prevent it with a tail guard while they are inside.” If the osprey continues to heal and gain strength, the tail guard may be removed and the patient moved outdoors for flight training. “The swelling is improving slowly and for now the osprey has good range of motion but the bone takes a few weeks to heal,” Dr. Cabot added. “Decreased range of motion and arthritis can develop over that time so we will continue physical therapy, but the prognosis at this time is unknown. If the osprey does well with two weeks of cage rest we will consider moving it outside for continued physical therapy.”