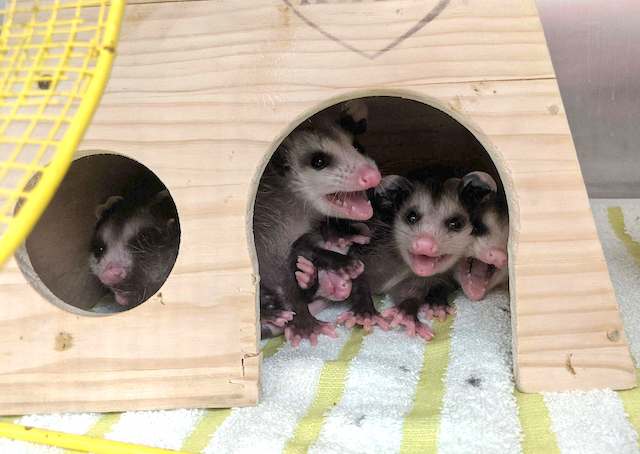 Opossum babies (Didelphis virginiana) are very common patients at CROW, so much so that the clinic has a designated Virginia opossum room. Often times, their mothers are accident victims. Motherless, the babies are raised at CROW with a shot at being released to the wild. When the incubators in the Virginia opossum room – dedicated to the memory of longtime CROW volunteer and supporter Ann Arnoff – are full, staff and students are kept busy with around-theclock care.

As of May 9, CROW staff members are caring for 81 opossum babies.

“The majority of them have come in as orphans – they fell off mom too soon and are too young to survive on their own, but didn’t have significant injuries,” said Breanna Frankel, CROW rehabilitation manager. “However, there are a few that have come in due to a predator attack and are being treated for wounds.”

Frankel hopes more incubators will be added to the successful program.

“We have incubators that we can set temperatures and humidity at a specific point, which allow our neonates and infants to have living conditions similar to being in their mom’s pouch. Lucky for us,  the room has three incredible incubators, several large single and double-wide cages, heating pads, a mini refrigerator and other various storage, so everything needed for a feed or treatment is right there in the room with us,” she said. “We are lucky to have an amazing student program which brings students from all over the world to train with us. One student or staff member is assigned to the opossum room daily and, depending on the size of the infants, feeds can start as early as 6:30 a.m. and continue until 10 or 11 p.m.”

Opossums cannot be nipple-fed due to their many sharp teeth and must be tube-fed until old enough to be transitioned to solid food. 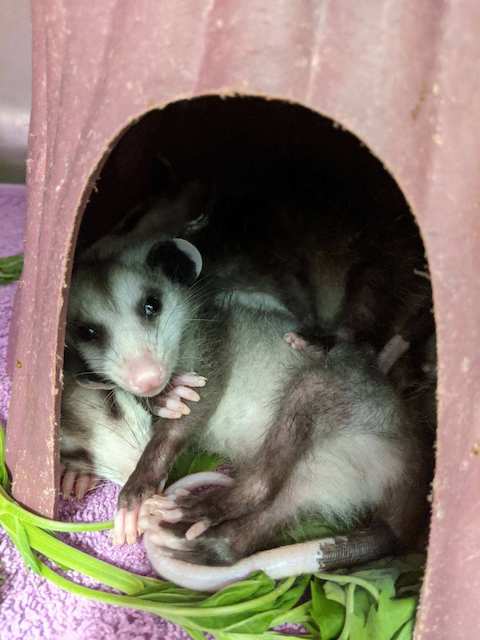 “Tube-feeding requires a feeding tube (such as) red rubber catheters, syringe, hot water bath and a milk supplement. We use a special milk formula designed specifically for opossums that has appropriate nutrient contents for growth and development. We first warm the milk in a hot water bath, then test it to make sure it is not too hot. When it’s ready, we gently insert the feeding tube down their throat into the stomach and slowly give the milk formula,” said Frankel. “Our smallest opossums may be tube-fed up to seven times a day, but as they grow and start to wean, that number decreases. We begin to offer small bowls of milk or kitten chow mash as soon as their eyes open, usually between five to six weeks old.”

Once the opossums are eating a solid diet of various foods and have reached a certain size, they are moved to an outside enclosure until big enough to be released.

“They are usually around four months old when they are released, but some groups may take up to five months. They are completely weaned off milk by three months old in the clinic, and then they spend a month in outdoor cages to ‘wild up.’ In the wild, they typically leave mom between four to five months, so we try to replicate that in the rehab setting."

“Caring for infant opossums is relatively easy with the right tools and training. Tube feeding mimics the way they are fed in the wild. When they are born and crawl into mom’s pouch, they swallow one of her teats and stay continuously latched on for the next two months while they develop. Their teeth really don’t affect the care we provide them until they are three to four months old, when they would be learning to survive on their own. There are definitely younger groups that come in very aggressive and we have to be cautious, but they don’t really have a long enough neck to turn and bite when handled properly. Once they are three months or older, they will bare their teeth as a warning, then ‘play dead’ if handled. As they get older, it’s very encouraging to see them being aggressive, because they are learning how to survive in the wild.”

Even with an opossum’s rough demeanor, CROW staff find positive measures in these mammals.

“Raising opossums is very rewarding, especially to see them come in very sick and make it through to release. These animals are very special as they are the only marsupial in North America. They very rarely carry any types of disease because of their low body temperature, they are a pollinator species, like bees, and they are minimally affected by venomous snake bites. By eating fleas, ticks, and mosquitoes, they are preventing the spread of diseases that affect humans, pets, and wildlife and they can also help decrease the venomous snake population. They are a gem of the wildlife world which is why we want to spread the word about how great they are, but it is important to remember that they need specialized care and it should be left to professionals to provide it!”