The mourning dove (Zenaida macroura) is a plumpbodied, small-headed and short-billed dove that is regarded as the most widespread and abundant game bird in the country.

Mourning doves spend a lot of time on the ground foraging for seed. Interestingly, they have the ability to store seeds in an enlargement of their esophagus called the crop. They’ve been known to eat roughly 12 to 20 percent of their body weight per day.

At CROW, a fledgling mourning dove was admitted when it was found surrounded by cats after it had fallen from its nest in Cape Coral. Upon intake, the bird weighed 50 grams and was warm, alert and apparently healthy. With a history of a cat attack, the bird was started on antibiotics due to the amount of bacteria present in a cat’s mouth, which can lead to life-threatening infection. 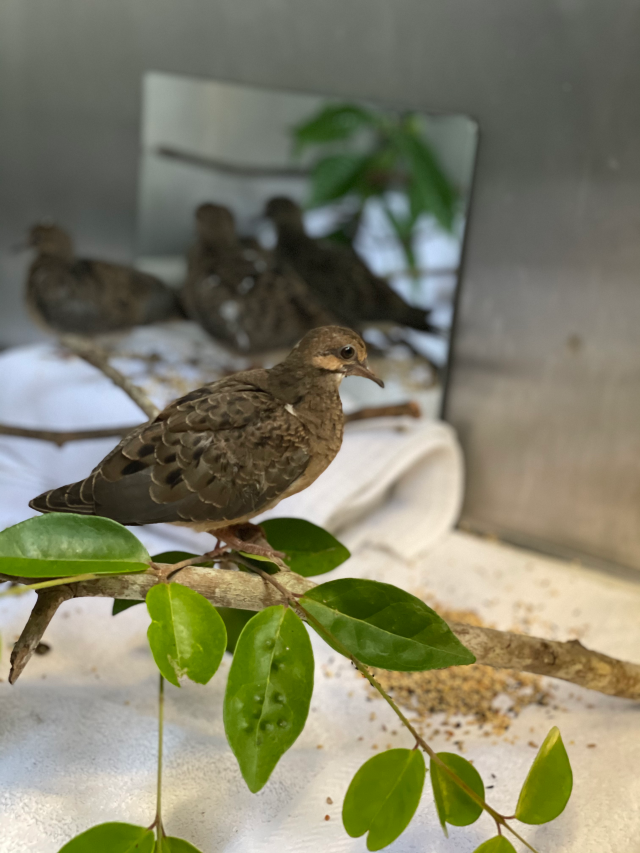 “We use a broad-spectrum antibiotic that is commonly used to cover for bacteria such as Pasteurella multocida, commonly found in cat mouths,” said CROW Rehabilitation Manager Breanna Frankel. “We keep suspect cat attack patients on five days minimum of antibiotics. At that point, we reassess them to determine if there is continued concern for infection. If there is, we will continue their antibiotics for a few more days. If not, we discontinue the medication and monitor for any potential changes."

“Signs of infection don’t show up right away, so with history of cat attacks, we can’t take the risk of not providing immediate antibiotics. Infection and bacteria in the bloodstream can set in quickly, so it is important to start antibiotic treatment, if possible, before the animal appears sick.”

While a cat attack was suspected, there were no clear signs of puncture wounds.

“There were no obvious marks from cat bites,” confirmed Frankel. “The tricky thing with cats is that their teeth don’t always puncture the outer skin but can still damage internal organs. It’s difficult to assess cat bites because not all wounds are externally visible.”

The patient was also started on a feeding plan while it was closely monitored for signs of infection for a few days. “Doves under a certain size are fed a liquid diet until they are developed enough to start digesting seeds,” said Frankel. “This dove hasn’t fully weaned onto eating seed, so it is still receiving a couple supplemental liquid feeds a day."

“The next step is for the dove to continue growing. It is starting to transition onto eating seed and will continue to grow into a fledgling and continue the rehabilitation process.”

As of March 19, the mourning dove had spent a week at the clinic and needed more time to learn how to live in the wild.

“The dove at this point can’t go back to mom and dad so it needs to learn survival skills here at the clinic,” said Frankel. “This means foraging for food, avoiding predators and acting appropriately.”

CROW hospital staff members have reported that the patient is eating well and has been getting along well with its cage mates. The young dove weighed in at 68 grams.

“The patient is doing very well and is still transitioning to eating on its own. It’s getting along with its cage mates and is making good progress,” said Frankel. “As of right now, it will be here for at least a couple more weeks before being considered for release."