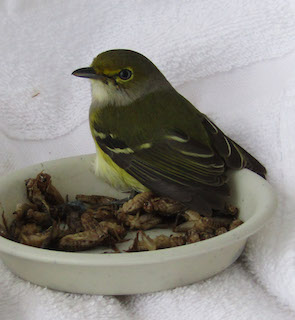 It’s that time of the year again as snowbirds make their way south to escape the cooler weather up north. While this statement may apply to our seasonal tourists, it also relates to migratory birds. Florida has become a popular pit stop for these birds as this physically demanding trip requires rest.

According to the National Audubon Society, regular migrants make up roughly 40 percent of the total number of birds in the world. When they do migrate, birds can reach great heights, like the Ruppel’s griffon vulture documented for the highest recorded altitude at 37,000 feet. They also can log great distances, like the Arctic tern that holds the longest migration in the world at more than 49,700 miles in a year. Then there are the speed demons, like the great snipe that soars for many miles at speeds that reach 60 miles per hour. Or, how about the endurance fliers, like the bar-tailed godwit that regularly beats its wings for nearly 7,000 miles without stopping.

Migration for these small animals can be precarious due to natural occurrences like harsh weather. To combat exhaustion, migratory birds may fly lower and become much more susceptible to varying traumas such as flying into windows and being hit by cars. According to ABC News, nearly one billion birds die each year from window collisions in the United States alone, while approximately seven million die from striking television and radio towers in North America annually. Then, if these birds do make it to their rest stops, they may face predator attacks. Since wild animals admitted to a clinic are unable to explain what happened to them, veterinarians rely on history provided by the finder and physical signs of traumas to help determine what happened to the patient.

At CROW, approximately 115 migratory songbirds were admitted in 2018. 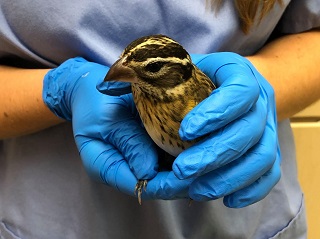 “The most common reason CROW admits migratory birds is for window strikes,” said Dr. Megan Cabot, CROW veterinary intern. “Other reasons we see these type of patients include predator attacks such as cats and dogs, unknown traumas and being hit by cars.” Examples of recent migratory songbirds admitted to CROW include a white-eyed vireo (Vireo griseus) that suffered from hind limb paresis and a rose-breasted grosbeak (Pheucticus ludovicianus) that was the victim of a cat attack. “The vireo had no history, but (the) physical exam revealed weakness in the back legs suggestive of spinal trauma,” said Dr. Cabot. “The grosbeak has pain in its left wing, but no open wounds or apparent fractures on radiographs. We suspect a strain, but there may still be underlying trauma that we have not been able to identify yet.”

Both patients were reportedly placed on pain medications and cage rest. “The vireo passed a flight test a few days (after admittance) and has been released,” said Dr. Cabot. “The grosbeak has been with us for a few days so far and will likely need a longer period of supportive care before it is strong enough to be flight tested.” Having nesting and resting areas for these migratory birds is vital to their survival.

“Having locations for migratory birds to safely rest and refuel on their routes is extremely important,” said Dr. Cabot. “Birds migrate to reach ideal breeding and feeding grounds, as well as escape harsh weather conditions. Without safe resting locations with appropriate food, these birds won’t have the necessary energy to continue their migrations, likely succumbing to starvation or exhaustion from the journey.”