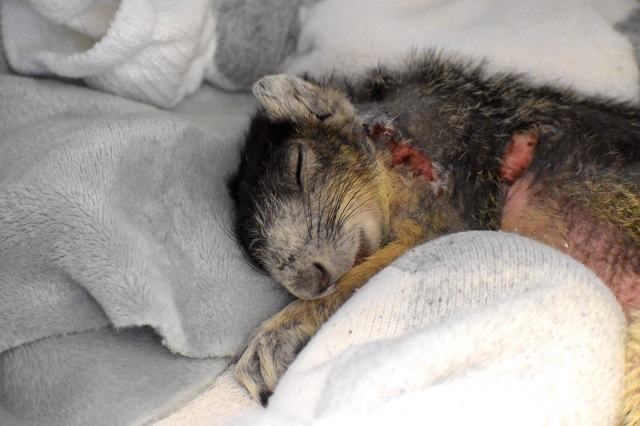 The mangrove fox squirrel (Sciurus niger) is a large tree squirrel that is listed as threatened in Florida. Known for its long, bushy tail and strong hind legs, this species of fox squirrel has the ability to leap easily from place to place.

Mangrove fox squirrels dine on plant material including fruit, nuts, seeds and buds. If they had a preference, they would consume pine seeds, but will occasionally eat insects and bird eggs.

At CROW, an adult male mangrove fox squirrel was admitted with a severe case of mange. Mange is caused by mites and often leads to hair loss and scabbing skin. In the case of this squirrel, it caused large wounds with infected tissue on its front shoulders and hind legs.

Mange is also contagious and spread by direct contact.“Yes, it is important to wear gloves and not come into direct skin to skin contact with the squirrel or towels within its cage,” said Dr. Robin Bast, CROW staff veterinarian. “As with all patients, it is important to wash hands immediately following handling.”

Dr. Bast was asked how such animal would contract this type of mange. “Typically, it happens secondary to another underlying condition that results in the immune system being suppressed. There is also a higher risk of getting this parasitic infection when large numbers of animals congregate abnormally in a small area and increase the likelihood of transmission- such as at inappropriate feeding stations,” she said. “This is another reason, aside from it being against the law, that it is not recommended to feed wildlife.”

The veterinary team removed infected tissue, then cleaned the wounds and placed a honey bandage over the back leg wounds overnight. The following day, the bandages were replaced with suture seal. “The wounds were flushed and manuka honey was applied initially to help manage secondary bacterial infection at the sites where the squirrel had injured itself. The wounds were created secondary to repeated scratching since this parasite causes pruritus or itchiness,” said Dr. Bast. “Once the infection under control, a product is similar to liquid bandage was applied since the wounds were extensive and in areas hard to keep bandaged in an active patient. Once the suture seal dried, it formed a waterproof, flexible barrier that prevented further contamination as the wound continued to heal.”

CROW medical staff are providing the squirrel with antiparasitic and antibiotic medication to treat the mange, along with nutritional and wound management care. Additionally, they must take extra precautions, such as isolating the squirrel, to ensure the mites do not spread to other patients.

“The squirrel is being housed in a cage separate from other mammals, must be handled with gloves, and its cage appropriately disinfected to prevent spreading the infection. It has already received medication topically for the mites and, at recheck, no mites were found,” said Dr. Bast.

After a week at the clinic, the patient appears to be on the mend. “The patient’s wounds continue to heal, and the mites are gone. It can take several weeks to recover, and for the fur to grow back, said Dr. Bast. “Since Florida usually has warmer weather, we won’t have to wait for all the fur to grow back before the squirrel can be released, just for the wounds themselves to heal.”