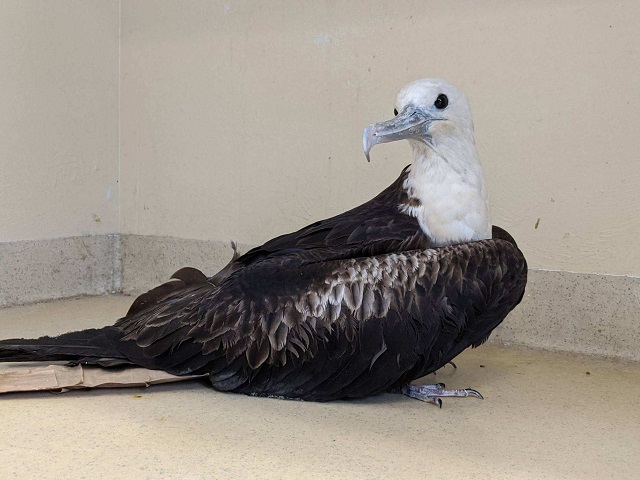 The magnificent frigatebird (Fregata magnificens) is a large seabird known for soaring effortlessly over oceans with outstretched wings. Its forked tail helps it steer over long flights out to sea where these birds live when not breeding. It is so-named due to its majestic flight, noted as magnificent by onlookers.

At CROW, a juvenile magnificent frigatebird was admitted after being transferred from Pelican Harbor Seabird Station. The bird was originally admitted after not being able to fly, but was transferred to CROW because it was suspected to have aspergillosis – a fungal infection in the lungs – and needed to receive an endoscope procedure.

“A common cause of respiratory disease in birds is fungal in nature, resulting in large plaques or granulomas in the lungs and air sacs. Based on the abnormal appearance of lungs on x-rays, this was a potential concern,” said Dr. Robin Bast, CROW’s staff veterinarian. “Coelioscopy – endoscopic evaluation of a bird’s body cavity – showed abnormally pale, mottled appearance to the lungs, however, the air sacs were not thickened and no plaques were found.

Upon intake, it was also noted that some of the patient’s tail feathers were broken off or tattered. A tail guard was utilized.

“The tail feathers were likely damaged by the bird spending too much time on the ground due to its debilitation. Typically these birds spend the majority of their time in the air or on the water,” said Dr. Bast. “A tail guard is a protective covering used to prevent feathers from being bent or broken while the patient is on the ground or in an enclosure. We get creative making these – you can use old x-ray film and tape, or we prefer to use a type of light brown packing tape which sticks to itself with the application of water and is easily removed. This material is lightweight enough that it does not affect the bird’s ability to balance.”

Based on the results of the scoping and bloodwork, it was determined that the patient did not have aspergillosis, but may be battling with pneumonia instead. The bird was started on a course of antibiotics for treatment.

“Since there was no evidence of fungal disease seen, we determined the changes in the lungs were caused by bacterial pneumonia. This is treated with a course of antibiotics,” said Dr. Bast. “Since pelagic species – birds that normally live far out at sea and only come to land for breeding purposes – are more susceptible to aspergillosis, especially when they are already immunocompromised from another illness, we also put this patient on a preventive dose of anti-fungal medications.”

The frigatebird was anesthetized last Thursday to evaluate its lungs and “imp” some of the patient’s tail feathers.

“We had to remove some of the damaged feathers to allow new ones to grow back in naturally. One feather was removed completely due to severe damage, and three feathers were imped. This means that a temporary feather of similar size/shape was transplanted into the feather follicle. This will allow the bird to continue to fly and build strength while waiting for the rest of its feathers to grow in naturally through the molt process,” said Dr. Bast. “Since we did not have any frigatebird feathers in our feather bank, we used a combination of eagle and red-tailed hawk feathers in this case.”

The patient will now spend time at CROW with other large tropical seabirds.

“This patient will be in care until it grows its feathers back in, which could take weeks to months,” said Dr. Bast. “It is currently in an outdoor flight enclosure with our masked booby patients.”