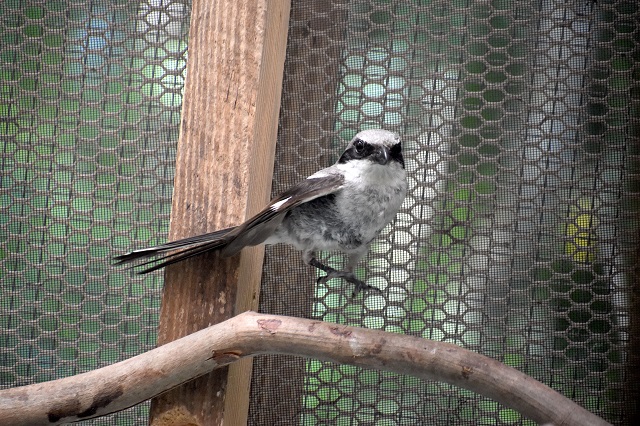 The loggerhead shrike (Lanius ludovicianus) is no sea turtle. Despite its small size and perching bird status, it has more characteristics of a hawk.

The thick, large-headed songbird has a gray head, black mask, hooked bill, white breast feathers and white coloring in its black wings that match its tail feathers. This species of shrike is so-named due to the size of its head in relation to its body. The word loggerhead is a synonym and slang term for blockhead.

While a loggerhead shrike is literally a songbird, it has a raptor's mentality. It has the ability to attack its prey at the nape then skewer its victims on thorns or barbed wire while squeezing its kills into tight places for effortless dining.

While it lacks a raptor's talons, the loggerhead shrike still possesses the habits of a bird of prey, It can kill and carry an animal of the same size, and transport larger prey in its feet or smaller victims in its beak. That hooked bill features a pair of built-in pointy projections, aptly named "tornial teeth" that can paralyze an animal with a jab to the spinal cord.

At CROW, a loggerhead shrike was admitted after flying into a car and being unable to fly afterwards. When it arrived at the clinic, it was observed to have a beak tip fracture, a keel fracture and other abrasions.

After full radiographs were taken the next day, the keel fracture was confirmed. Dr. Robin Bast, CROW staff veterinarian, stressed less emphasis on the beak and abrasions.

"There was a small portion - only millimeters - of the tip of the beak fractured off, and it was not actively bleeding. It was not severe enough to prevent the bird from being able to grab and eat food normally," she said. "The site will be monitored closely for any signs of infection as it heals.

"The abrasions are minor wounds that were cleaned and scabbed over/healed quickly without requiring bandaging."

Surgery for the keel fracture was reportedly not needed. The shrike was treated with medication for pain and swelling. It is being closely monitored.

"Surgery was not required to stabilize this fracture," said Dr. Bast. " The patient was on strict cage rest to allow the bone to heal - this is important since the keel bone serves as the attachment for many muscles required for normal flight."

The patient is expected to make a strong recovery without a long rehabilitation period.

"Even with significant injuries such as this one, small songbirds can heal remarkably fast," said Dr. Bast. "After a week and a half of strict cage rest this bird has been moved to a small outdoor enclosure and is already starting to make short distance flights. It will take another two weeks of healing before this bird has built back enough flight strength to be released."

CROW officials call the loggerhead shrike "the butcher bird" because of its impaling techniques and survival instincts.

"Nature's critters are smart when it comes to finding ways to survive. Loggerhead shrikes use their beak to impale insects and other small prey items on sharp plant stems, then save those food items for later," said Dr. Bast. "Just another unique animal adaptation for survival in our environment."