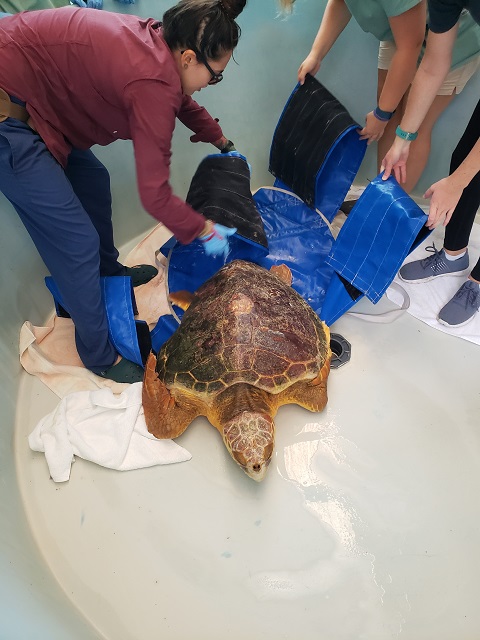 The loggerhead sea turtle (Caretta caretta) is regarded as the second largest sea turtle to the leatherback and the largest of the hard-shelled sea turtles. Adults average usually between two to three feet long and weigh between 175 and 440 pounds.

Loggerhead sea turtles get their name due to their disproportionately large heads but can also be identified because its shell is heart-shaped. The endangered and carnivorous mammals can be found in subtropical and temperate coastal waters.

At CROW, a sub-adult loggerhead sea turtle was found floating and unable to dive near Redfish Pass at the north end of Captiva Island. Through the combined efforts of a charter boat captain, who first spotted the turtle in distress, and Sanibel Captiva Conservation Foundation (SCCF)’s Coastal Wildlife team and Marine Lab scientists, the turtle was rescued and admitted to CROW for medical treatment. The turtle was bright and responsive, but had suffered a past boat strike that was partially healed. Shortly after intake, it was placed in a shallow freshwater tank to monitor buoyancy issues.

After a few days, the turtle was eating very well, but the left rear of the turtle continued to prevent it from diving in the tank. The next step was to use an ultrasound to attempt to locate a potential air pocket, keeping it buoyant and removing the air pocket. That process proved to be successful. “Yes, the ultrasound was used to find air in the body cavity and direct the needle to remove the air,” said Dr. Megan Cabot, CROW veterinary intern. “Approximately four liters of air were able to be removed.”

This process required CROW officials to employ an “all hands on deck” approach due to the turtle’s size and being unable to use anesthesia. “It takes five people to transport the turtle safely from the tank to the ultrasound in the clinic where a veterinary team of four stabilized it on the table for the procedure,” said Dr. Cabot.
“The procedure is relatively painless once we get passed the initial needle poke, and anesthesia in turtles is dangerous as they can stop breathing and stay asleep for an extended period of time – sometimes days! This turtle was very calm and cooperative throughout the entire procedure with no signs of distress.” The patient was then under observation.

“We are monitoring the turtle for a while because these air pockets sometimes refill over time and require more procedures while the source heals,” said Dr. Cabot. After a couple of more days in the clinic, the patient appeared to be improving.

“The turtle’s floating has resolved for now and the patient is much more calm, comfortable and eating very well,” relayed Dr. Cabot. “If the issue continues to be resolved and the turtle continues to do well, we may be able to clear for release.”
The care for such a large animal required a combined effort before and after admittance. “It takes a lot of folks working together to rehabilitate a turtle,” said Dr. Robin Bast, CROW staff veterinarian. “In this case, the concerned charter boat captain was able to assist SCCF staff in rescuing the turtle and get it to CROW for treatment. Once it is cleared for release, we coordinate with Florida Fish and Wildlife Conservation Commission (FWC) and make efforts to involve those who helped make the initial rescue possible. Collaboration is key to helping these species.”

UPDATE: This patient was successfully released on August 22, 2019