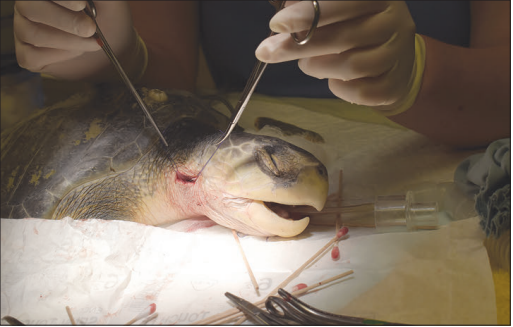 The Kemp’s ridley (Lepidochelys kempii) is the world’s most endangered species of sea turtle as well as the smallest and rarest of the seven sea turtles in the world. The marine reptile has a triangularshaped head and a slightly hooked beak. Its carapace is uniform in shape, making its upper shell almost circular in appearance. The Kemp’s ridley is unique from other species because it nests during the day and nests in group events called “arribadas,” which means “arrival” in Spanish. They are primarily found in gulf waters but can also be seen in the Atlantic Ocean.

The Kemp’s ridley is named after Key West fisherman Richard M. Kemp, who is the first person known to submit the species for identification in 1906. At CROW, a juvenile Kemp’s ridley sea turtle was admitted from the Sanibel Lighthouse fishing pier after it was hooked by an angler. Upon initial examination, veterinarians found a monofilament line protruding from its mouth. X-rays were taken and a hook was found lodged in the turtle’s stomach. There were no other obvious abnormalities. Veterinarians scheduled an endoscopy to remove the hook, but instead performed surgery to extract it.

“We actually did not perform endoscopy but attempted to remove the hook by feeding a tube over the fishing line attached to the hook until it covers the hook – which we check placement by x-ray – then pulling back on the tube and line together to remove the hook,” said Dr. Charlotte Cournoyer, CROW veterinary intern. “This was going well until the hook became lodged in the esophagus. This is a common issue both with this technique and endoscopy because the esophagus of sea turtles is lined with many papillae, or finger-like projections, that like to grab onto things such as a hook. This is why we then removed the hook surgically.

The difference between the two procedures was defined. “Endoscopy is using a special camera to visualize inside the esophagus and stomach then feeding a grabber down that camera tube to grab the hook,” said Dr. Cournoyer. “Surgery involves incising into the esophagus with a blade, removing the hook manually, then suturing shut the incision.” Once the hook was extracted, the sea turtle received further treatment. “We treated with antibiotics, pain medications, nutritional support and monitored bloodwork,” said Dr. Cournoyer. “Once the patient was alert following surgery, after ensuring the incision still looked good, we placed the patient in a deep tub to assess swimming capabilities. We have been monitoring swimming abilities for several days, and the patient is swimming well.” 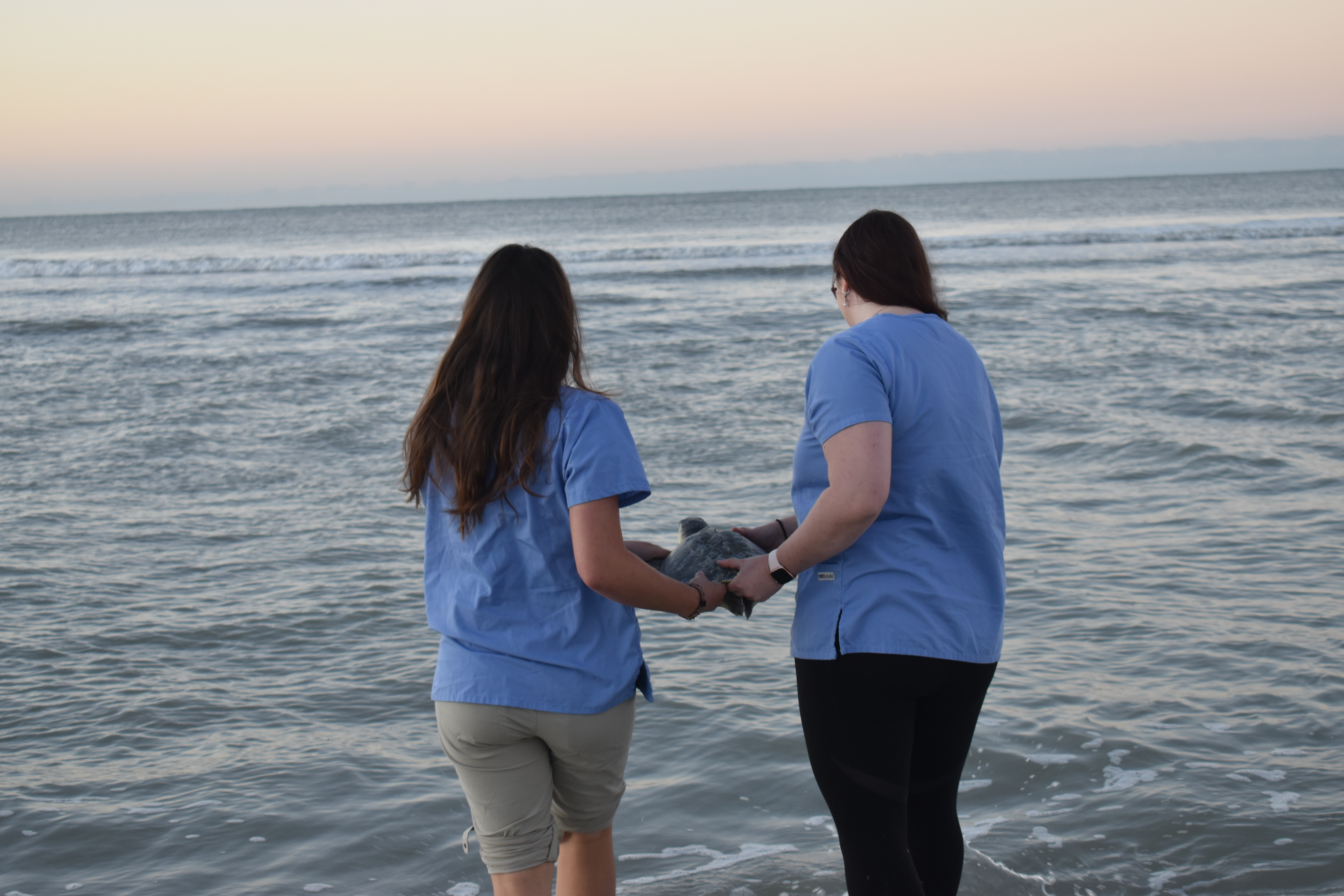 The Kemp’s ridley’s recovery was successful, and it was released early Tuesday morning. Anglers are reminded to practice safe fishing protocols to reduce the harmful impacts of monofilament and other fishing gear. “We always encourage fishers to remove all hooks and lines from the beach and water when they leave. Any gear left behind has the potential to impose significant damage to the health of wildlife, even death,” said Dr. Cournoyer. “Please visit www.mindyourline.org for more information about how to safely remove your gear from wildlife if they are entangled and please always feel free to contact CROW if you think an entangled animal could need medical assistance.”