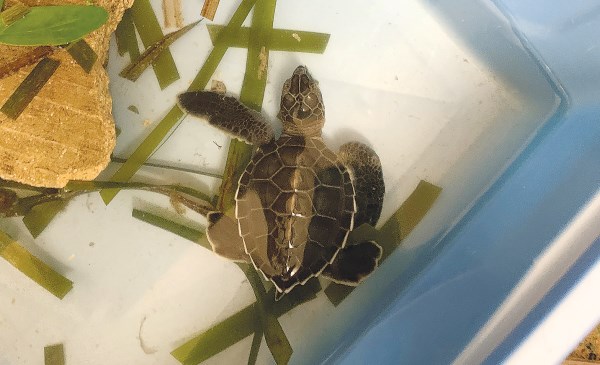 The green sea turtle (Chelonia mydas) is named for the color of the fat under its shell. It is the largest hard-shell sea turtle and only herbivore among the different species that includes loggerhead, leatherback, hawksbill, Kemp’s ridley, olive ridley and flatback.

At CROW, a post-hatchling green sea turtle was admitted after being washed back ashore in Boca Grande. Upon examination, the turtle, estimated to be about four months old, had a deep laceration with some necrotic tissue present on its front right flipper.

“In most cases, necrotic tissue must be removed to allow healthy tissue to regrow,” explained CROW Rehabilitation Manager Breanna Frankel. “Necrotic tissue can also lead to other systemic infections, so we are monitoring it closely.”

Unfortunately, the injury and subsequent swelling led to decreased use of the flipper. Veterinarians cleaned and bandaged the laceration and transferred it to rehabilitative care.

“Initially, the wound was flushed out and a topical antimicrobial gel was applied. This sea turtle had a bandage on the wound site while it was dry docked. When their shell and skin is dry, we can apply a bandage similar to one on people,” said Frankel. “Since our post-hatchling lives in water full time now, we are not currently applying anything to the wound site. Once it was placed in water, the best thing we can do is keep the water clean and allow the turtle to live in as natural of an environment as possible while healing.”

The patient reportedly has a healthy appetite and is eating a formulated turtle food in pellet form while also chewing on some sea grass, said Frankel. While the injured flipper did not look good upon admittance, the young turtle has rebounded and is strengthening its limb in the water.

“Initially, we assumed we would have to do more physical therapy based on how little the flipper could move,” said Frankel. “However, the sea turtle has been moving the flipper more in water and even more when it comes to finding food. Doing physical therapy on its own will be crucial for healing.”

The road for the post-hatchling is still uphill, warns Frankel.

“It will take several weeks for the wound to heal based on the amount of infection we’re facing,” she said. “If the flipper successfully heals, (the patient) can be returned to the water.”

Upon hatching, hatchlings usually emerge from their nest and make their way to the shallow, coastal waters to swim out in hopes of reaching the Sargasso Sea. This particular turtle will get a bit of help if and when it is cleared for release.

“It won’t be released from shore,” said Frankel, “it will be boated out a distance and released offshore to offer the best chance of survival.”

The young patient’s journey has already been one that has tackled difficult odds to get back to land. It is lucky to have a second chance at survival.

“Only about one in 1,000 hatchlings survive to adulthood. The fact this one made it to CROW without being picked off by a bigger predator or passing due to the injury is incredible,” said Frankel. “Getting every turtle back out to the wild is critical to their continued survival, so we are doing everything possible to help this little one recover.”