The great horned owl (Bubo virginianus) is a large owl with large ear tufts and yellow eyes. Those eyes have pupils that open widely in the dark and possess excellent night vision. While they don’t move in their sockets, this particular owl’s eyes can see more than 180 degrees in any direction due to the ability to swivel its head.

At CROW, a great horned owl was admitted after being hit by a car. The finder suspected that the owl had suffered a broken wing. On presentation, the owl had uncontrollable eye twitching, a small retinal tear and two corneal ulcers that indicated head trauma.

“This owl had corneal ulcers, which are abrasions on the cornea typically occurring as a result of some head trauma.

In this case, they were superficial.

The owl also had a small tear in the retina, or the back part of the eye. 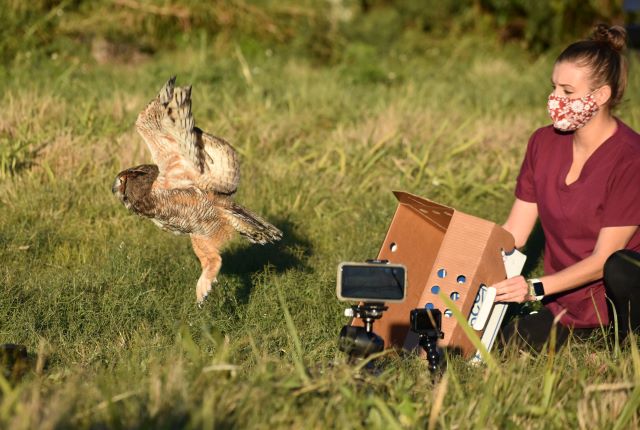 Luckily, it did not affect this owl’s vision,” said Dr. Robin Bast, CROW staff veterinarian. “Birds have very large eyes compared to the size of their skull. When they inadvertently fly headfirst into something – such as a vehicle or a building, they can sustain trauma to the eye. We always do a complete eye exam on birds that have sustained head trauma, since many of them also have eye damage as well.”

Veterinarians decided they would take radiographs once the patient was stable. The next day, the patient’s radiographs were within normal limits and showed no indication of a broken wing. The patient was placed on medications to treat nerve pain, inflammation and infection. A few days later, the owl was more mentally appropriate and could be moved outdoors.

“Luckily, this patient recovered quickly from its head trauma, over the course of a few days. Some birds aren’t as lucky and may have permanent neurologic damage due to the traumatic brain injury,” said Dr. Bast. “At CROW, we have positive success rates treating these birds aggressively with IV fluids and anti-inflammatory medications.”

After a couple of days outdoors in the small flight enclosure, the patient passed all the requirements on CROW’s checklist for release such as coordinated flight, ability to hunt for food, identify predators and eat well.

“The great horned owl did recover quite quickly with the appropriate treatments and was in fact released a week after intake. After only a few days with treatment for eye injuries, the owl had recovered enough to be moved outside for flight testing and light conditioning,” said CROW Rehabilitation Manager Breanna Frankel. “Outdoor testing was only to test the bird’s flight abilities following the injury. With multiple perches set up in a jungle gym fashion, we were able to watch the great horned owl maneuver through different flight courses and successfully land. When there are eye injuries, birds will sometimes compensate for the injury which can change their flight patterns as they re-learn, but there were no lasting eye effects for this bird. The successful flights early on made us very hopeful for a speedy recovery.”

The patient did not suffer any setbacks during recovery. In the early evening of February 3, the owl was successfully released back to the wild.

“Once the owl had a normal mentation/attitude and was displaying normal defensive behaviors, eating well on its own and flying normally, we had no reservations about its ability to hunt on its own. It was cleared for release and went back home,” said Dr. Bast.