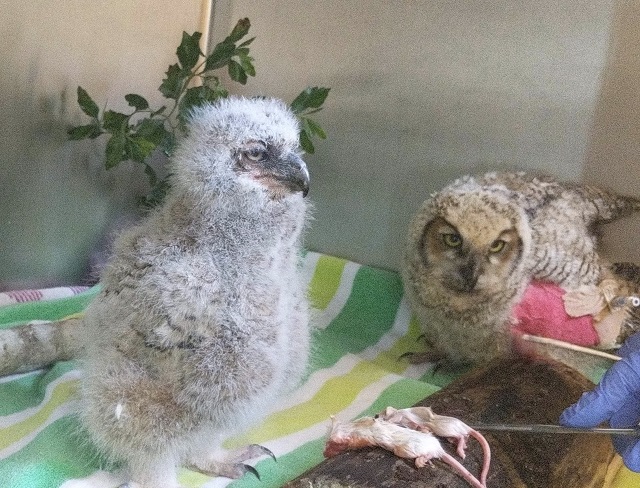 The great horned owl is a nocturnal bird that dwells within woods that have fields or other open areas around. They are distinguishable by their long, earlike tufts, intimidating stare and deep hoot.

At CROW, a nestling great horned owl (Bubo virginianus) was admitted to the clinic from Estero after it reportedly fell from its nest. Veterinarians examined the owl and did not find any signs of broken bones or apparent injury from the fall, but did note it to have an increased respiratory effort, likely from stress, being overheated or pain from soft tissue injuries. It was placed in an oxygen chamber to help it calm down and breathe easier. The search for the exact location of its nest began and was located three days later. However, the parents were not seen in the area and it was not able to be re-nested.

“Babies can fall from the nest and end up on the ground for several reasons – pushed out by a sibling, commonly referred to as ‘siblicide,’ being clumsy, or after stormy weather/high winds,” said Dr. Robin Bast, CROW staff veterinarian. “Often, the parents will continue to feed and protect the baby even if it is on the ground. If it is injured or orphaned, then it needs to be treated by certified wildlife  rehabilitators.”

Three days later, a second, slightly older, nestling great horned owl that fell from its nest was admitted to the clinic from Bokeelia. It was severely anemic and received a blood transfusion with blood donated from Mina, CROW’s great horned owl animal ambassador.“Our ambassador birds typically donate blood a few times per year – we are able to do this because birds regenerate blood cells faster than mammals do,” said Dr. Bast. “The typical scenario is a hawk patient that needs a blood transfusion as part of treatment for rodenticide toxicity, and Talon, our red-tailed hawk, has donated blood to help. Another scenario is when a seabird suffering from red tide poisoning needs a blood transfusion, we can often take blood from another seabird patient that is healthy and close to release.”

Both owlets are currently being housed and raised together. This will help them learn from each other as they grow and prevent them from becoming habituated to human care.

Breanna Frankel, CROW rehabilitation manager, said the birds are adjusting well. “The first couple days they stayed on different sides of the enclosure, but gradually came together. They are regularly seen side by side, and they eat side by side as well,” she said. “Their day beginsaround 7:30 (a.m.) when we gently wake them up and offer the first meal. They are left alone in the enclosure with enrichment, mirrors, stuffed animals, nature sounds and various food bits. A second meal is offered around 2 p.m. and a third around 8 or 9 p.m. The most important thing now is getting them to pick food up on their own. As they begin to eat on their own, we will only have to supply food twice a day, which limits our interaction even more.”

Frankel stated that the owlets being raised together is very important in their rearing.“They need to know that they are great horned owls, not humans, in order to survive in the wild. Any type of habituation can prevent a successful release when they are ready. Being raised “wild” with another owl and potentially having Mina foster them is how we prevent habituation. They will likely be at the clinic for the next couple months until they learn to fly and hunt on their own, at which time we will determine the best release plan. If the opportunity for cross-fostering with a wild nest arises, it would be a good option and might change our course of action. We do our very best to raise these babies to be successful and wild, but having owl parents is always the best choice, if possible.”