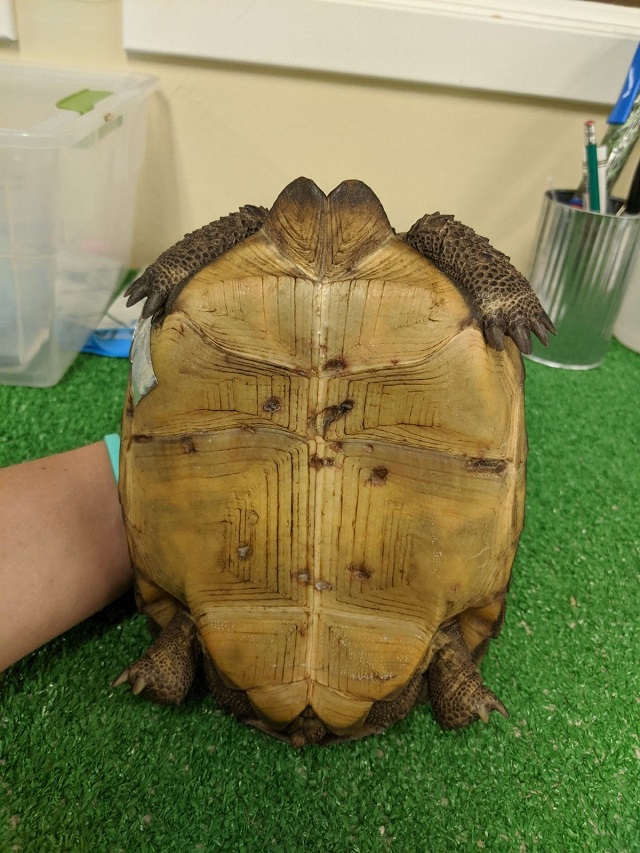 Puncture wounds on the shell of a gopher tortoise (Gopherus polyphemus) can be troublesome. In 2019, CROW reportedly admitted 12 tortoises that had been attacked by dogs. Of the confirmed cases, nine were released and one was deemed a permanent captive due to a leg injury.

This year, four “dog attack” gopher tortoises have come into the clinic to be cared for – two of them during a recent two-week period. On June 26, a juvenile gopher tortoise that suffered multiple puncture wounds to its carapace (upper shell) and plastron (under shell) and a fracture to the bridge (sides that connects the upper and lower shell) was admitted from Sanibel. On July 6, another juvenile gopher tortoise that had puncture wounds to its carapace as a well as a displaced piece of its shell was admitted from Lehigh Acres.

The punctures to the top of the shell of the first tortoise were suspected to have also punctured the lungs based on expiration sounds and bubbles. This was confirmed with x-rays.

“Mammals and birds breathe when muscles expand and contract their rib cage,” said CROW’s Rehabilitation Manager Breanna Frankel. “Tortoises cannot do this because their ribs are fixed to the inside of their shell, so they have different muscles that allow them to inhale and exhale. Their lung-to-body ratio is much larger than humans, which means they do not have to breathe as often. Since their breathing mechanism is different, if the top of their shell has punctures into the lungs, it may not affect their overall ability to breathe. The biggest concern is whether or not the lungs will heal completely, and each case is different.”

Remarkably, tortoise lungs can heal if given enough time. The trick is to clean and bandage the wounds very carefully so as not to get any fluids into the lungs.

“All puncture wounds are cleaned and flushed daily for the first few days at the clinic, and the severe ones are filled with an antimicrobial gel to keep them healthy while they begin to heal. Some of the less severe punctures do not require any topical medication and can just be covered with a dry gauze bandage for protection while they heal,” said Frankel. “Our most severe cases sometimes require months of bandage changes before they are ready for release.”

Both recent patients have improved during their stay. 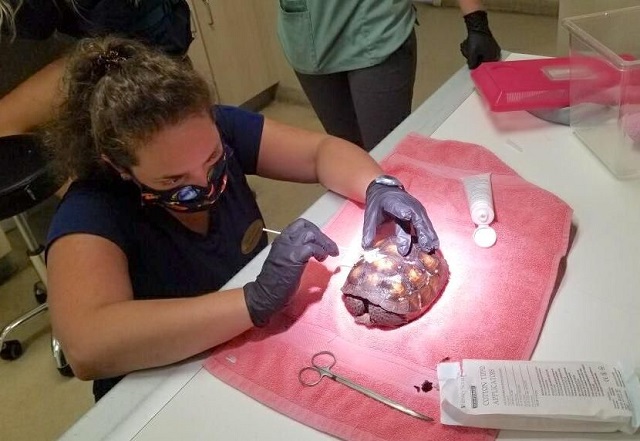 “(The June 26) tortoise has been improving very quickly and no longer requires any bandages. Initially, you could hear the air escaping out of the puncture wounds from the lungs, but they have since healed over. Our hope is that it will continue to improve and be ready for release over the next couple weeks,” said Frankel. “The July 6 tortoise is doing well considering the severity of the wounds and has started eating well. The displaced shell fragment was removed, which left a portion of the shell missing. This area is flushed every other day and antimicrobial gel is applied to the area then re-bandaged. We hope to see some healthy tissue growth over the next several weeks as its body continues to heal.”

Frankel stated gopher tortoises, especially young ones, are generally in care much longer than other patients due to the time it takes them to heal. Dog owners must take heed and keep their pets leashed while near a gopher tortoise’s habitat.

“Typically, we see tortoise hatchlings the size of ping pong balls to juveniles the size of a small dinner plates admitted due to domestic animal attacks,” said Frankel. “Their small size makes them easy targets. Since they are relatively slow moving and their defense mechanism is to pull all their limbs into their shell, it’s easy for animals to pick them right up and use them as chew toys. That’s why it is so important for pet owners to keep a close eye on their pets while outside and keep them leashed when enjoying nature.”