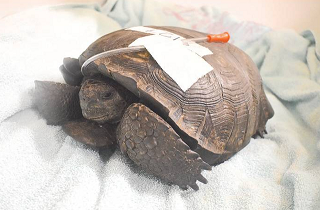 The gopher tortoise is a medium-sized terrestrial turtle that is listed as “threatened” at the state level. It is one of five North American tortoise species, with the gopher tortoise taking up residence in areas from southeastern Louisiana to South Carolina down through Florida.

Gopher tortoises can be identified by their stumpy, elephant-like hind legs and their strong, scaly forelimbs that work like shovels when it comes to digging burrows. They are different from sea turtles in many ways. One important feature of a sea turtle is that it has flippers for feet to help navigate in water. Gopher tortoises do not swim well, so do not mistakenly place them in the gulf.

At CROW, an adult gopher tortoise was admitted to the hospital after being backed over in a driveway in Bonita Springs. Upon intake, the tortoise was alert, but dehydrated. The tortoise suffered a fractured shell above its right rear leg. The tortoise was provided pain medication, and veterinarians cleaned and bandaged the area. The bandage has been replaced with a new one daily since intake.

”We start by cleaning the wound with sterile saline, then apply a moist covering such as medical-grade honey, naturally anti-microbial, or a sterile gel. We reduce the shell fracture as much as possible, then use a non-adherent dressing, Telfa, to cover the open spaces before using a strong tape, Elasticon, to hold it all together.” Said Dr. Mariah Lancaster, CROW veterinary intern. “There was one large piece of shell that fractured, but was still connected to the tortoises’s tissues. We also discovered on x-ray that we suspect him to have a pelvic fracture as well.”

Surgery was performed on December 20 to place a fixation for the fractured pieces to be held together as they continue to heal. Dr. Lancaster shared details.“First, we glued brackets onto the shell on either side of the fracture and allowed the glue 24 hours to set firmly. After 24 hours, we placed the tortoise under general anesthesia, with one person in charge of monitoring his heart rate and breathing for him throughout the procedure. A Dremel was used to remove sharp fragments of fractured bone in order to be able to fit the broken shell piece back into a normal position. The wound was cleaned again, and healthy blood flow was stimulated to encourage new growth and healing. The shell was put back together, and wire was used to tie the brackets together - securing the fractured shell into place. Finally, honey was applied to the fracture lines and any small open places, and a new bandage was placed,” she said.

“A feeding tube was placed, so we can easily give him food and medication throughout the coming weeks. The surgery took about two hours overall followed by an hour of recovery from anesthesia. The surgery went very well. The prognosis is still of concern, as we need to make sure his pelvic fracture heals well and he can use his back legs well enough for release.”

The patient will continue to stay at the clinic and receive rehabilitation until a probable release.“The tortoise needs frequent bandage changes as its shell heals, until normal tissue begins to take over for the external repairs, and will need slow reintroduction of physical activity to his hind legs. The feeding tube will be removed once he is eating well on his own and no longer needs his pain medication,” said Dr. Lancaster. “If the fracture site is stable in four to six weeks, we will start a staged process to remove the hardware in which we take one or two pieces off every five to seven days until all of the pieces are removed. This ensures the site is stable as each piece is removed.

“Once this tortoise’s fractures have healed and it is moving around well on its own, it can be returned to the wild.”