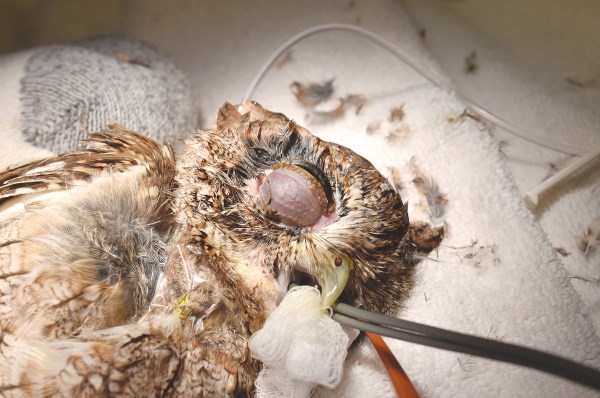 The eastern screech owl (Megascops asio) is a short, stocky bird with pointed ear tufts that are often raised. This nocturnal woodlands owl can be found generally east of the Rocky Mountains, anywhere from Mexico to Canada.

The screech owl is so called due to its trilling or whinnying song. It is often more heard than seen. Its natural coloring with patterns of bands and spots blends in well against tree bark for the perfect camouflage to protect itself.

At CROW, an adult eastern screech owl was admitted after flying into a powerline in North Fort Myers. Upon examination, veterinarians noted the severe trauma to its eyes and elected to hold this patient for surgery consideration. After a few days of the owl persistently holding its right eye shut, it was determined that surgery was the best course of action.

“We were waiting to remove the right eye in order to ensure the owl was visual in the left eye since there was evidence of prior hemorrhage and a small partial tear of the retina – the back of the eye – on admit exam,” said Dr. Charlotte Cournoyer, CROW veterinary intern. “Recheck exam after a few days shows these issues resolved, and the owl started to track our movements more, suggesting vision had returned to the left eye.”

With vision returned in its better eye, the owl was prepped for surgery. Six days after intake, the patient underwent surgery to remove the injured eye.

“Sometimes lens luxations are not painful, in which case the eye does not need to be removed,” said Dr. Cournoyer. “Since the owl was holding the right eye shut and tearing for a few days, it was determined the eye was painful and thus the best course of action was removal.”

A surgery such as this one required precision work.

“In birds, removal of the eye involves removing the soft contents of the globe (eyeball). We do not remove the entire globe since that would involve removal of bone,” said Dr. Cournoyer. “We then make fresh edges on the eyelids so they will adhere. We do this by excising the margins with small scissors, then we suture those edges together.”

“We monitor the site daily for discharge and integrity of the sutures. Medications include antibiotics, pain control and nutritional support,” said Dr. Cournoyer.

The patient has been recovering well and will continue to be closely monitored. The goal is to get the owl acclimated to its new “handicap” so that it can adapt to functioning with one eye.

“Owls can survive in the wild with one eye, since they hunt at night and are able to compensate using their hearing,” said Dr. Cournoyer. “The owl will need to stay for usually about a week post-surgery to ensure that the site is healing well and will spend a few days with our rehab team to make sure it can find food and fly.

“After that, the owl will be cleared to be released and does not need any further rehab or support.”