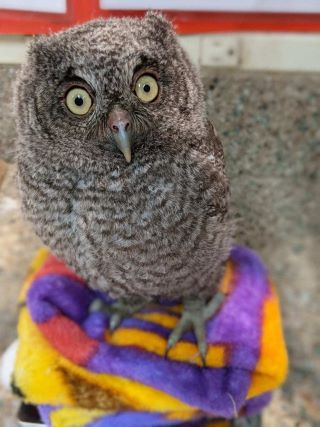 The eastern screech owl (Megascopsasio) is a king of camouflage, either appearing in gray or reddish brown coloring with bands and spots that hide well against tree bark. Due to this expert concealment, this nocturnal bird of prey is definitely heard more than seen and is known for its spooky trilling sound… not a screechy noise.

This species of screech owl is short and stocky with a large head and possesses almost no neck. It has pointed and raised ear tufts. While the male eastern screech owl is smaller than the female, his voice is deeper.

At CROW, a fledgling eastern screech owl was admitted when found on the ground after falling from its nest. Upon initial examination, radiographs were administered and the patient was not found to have any injuries or developmental abnormalities. After examination, the patient was sent to rehabilitation for supportive care. The rehab team closely monitored the fledgling owl and reported it doing well and casting healthy pellets.

“The patient received supportive care in the form of injectable fluids upon admission and was put on a feeding schedule. The fledgling graduated to regular food pieces and was being tongfed three times a day up to the point of re-nesting,” said Breanna Frankel, CROW rehabilitation manager. Since there was no injury to the patient, CROW officials are calling it an abducted animal case.

“Yes, it was likely a case of an abducted animal since the bird was well-conditioned and being well taken care of,” said Frankel. “If birds are seen on the ground during a typical ‘baby’ season, please call the CROW hospital hotline so we can help determine if the animal should stay put or come into the clinic. Fledging is a normal process that all birds go through where babies are usually found on the ground, hopping around and flapping their wings. The parents continue to care for the fledglings while they are on the ground learning to fly. When any healthy animal is taken from the wild, we are interrupting their learning and normal growing processes. Luckily in this case, the bird was able to be re-nested.”

Two days after intake, the patient was cleared for a re-nesting attempt. With the help of the finders, staff placed a nest box in a tree near where the owl was found, and the fledgling was successfully reunited with its parents.

“For fledgling re-nesting, we provided an owl nesting box, natural substrate and sticks to add inside the box, in addition to tools needed to mount the box onto the tree. We contacted the finders to play screech owl sounds outside near where the baby was found to see if they were able to visualize the parents. Upon arrival to the finder’s house, they had a speaker outside playing the screech owl sounds, and they had seen the parents flying between the surrounding trees responding to the sounds playing,” said Becca Wehmeier, hospital training coordinator. “We located a sturdy tree near where the baby was originally found that had a good location on the trunk to mount the nesting box. The nesting box was attached to the trunk of the tree with nails and bungee cords around the box and tree for added stability. After the box was mounted, the natural sticks and substrates were added prior to placing the fledgling inside."

While it was probably premature for the finders to bring the young owl in, they made up for it by helping inthe reuniting with its parents. “The fledgling’s parents were happy to have their baby returned based on their response to the screech owl calls, as they had obviously been looking for their baby. The finders and neighbors were more than willing to help in any way possible to reunite the baby with its parents, and we could not have done it without their help,” said Wehmeier. “Their aid in watching for the parents, playing the owl calls and showing us where the baby was found exactly so we could place the box as close to their original nest site as possible was extremely helpful.”