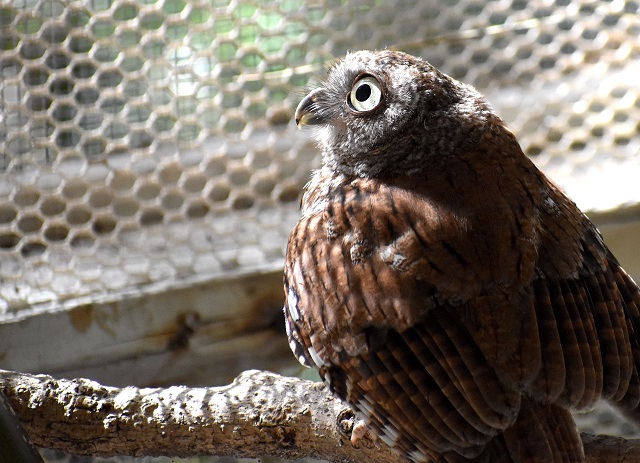 The eastern screech owl (Megascops asio) is a grayish, small stocky bird that appears to be neckless. Since it is known for its camouflage techniques in hiding in nooks and tree crannies, you may be able to hear its trilling call more than you can spot it.

At CROW, an adult eastern screech owl was admitted from Fort Myers after it was observed sitting under a vehicle and later laying on its side and not attempting to evade being captured. Upon intake, it was unclear whether the patient was suffering from an unknown trauma or a systemic disease. The patient was noted to be lethargic and weak with mild dehydration, but no obvious signs of infection.

“Various diagnostic tests were run during this patient’s course of treatment which included blood draws, fecal samples and radiographs. The blood tells us if there are toxic changes to the cells which could indicate infection. Fecal samples can show us if there are parasites present or issues involving the GI (gastrointestinal tract),” said CROW Rehabilitation Manager Breanna Frankel. “By utilizing all of these tools on multiple occasions, we were able to monitor his condition very closely.”

Veterinarians placed the owl in an oxygen chamber overnight and radiographs were taken the next morning. There were no significant findings on the radiographs, but there was evidence of a possible ruptured air sac, leading the team to suspect trauma caused its condition.

“When this screech owl was admitted, it was placed in an oxygen chamber due to its depressed mentation and unknown history of potential trauma. It became stressed during the physical exam and was placed in oxygen to help with any associated breathing issues,” said Frankel. “It was suspected that this patient had a previous rupture – based on some internal gas present on x-rays – that caused the issues it came in with.” 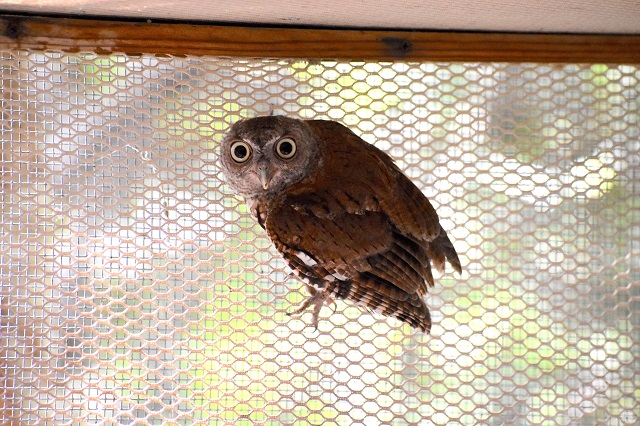 Frankel stated the patient’s trauma treatment was based on its admittance and pointed out that no two traumas are alike. “It consists of a multitude of treatments that are offered based on how the patient has presented. In general, our patients receive multimodal pain medications, fluid therapy, assisted feedings, assisted cleaning and oxygen therapy. Based on presentation, we may or may not place an IV catheter to bolus fluids and medication to critical patients. We also utilize x-rays, blood diagnostics, fecal analysis, ultrasound and endoscopy as needed to determine a course of treatment for each patient.”

The owl was started on a re-feeding plan and received oral fluids. Since intake, it has slowly improved and is now eating on its own and gaining weight. It was moved outside where it has been more active and making small flights.

“We offer food both during the day and at night in case it needs extra calories to heal, but it has shown no interest in daytime snacks. It does sleep during the day but will fly around when someone is cleaning/feeding inside the enclosure. Since we don’t have cameras in this enclosure, we don’t see the nighttime activity but it regularly vocalizes in the enclosure,” said Frankel. “The owl is flying well and has been doing well in an outdoor enclosure. It is still a little thin and underweight, but continues to make good progress. We don’t have any information about release at this point since it is still recovering.”