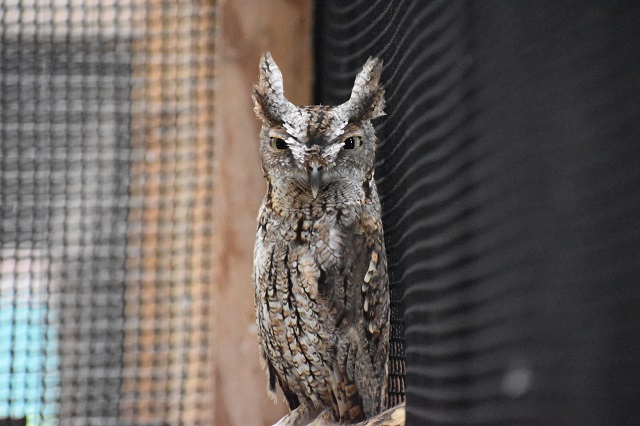 The eastern screech owl (Megascopsasio) is known as a tree owl and is only five inches in height on average. It does have a big spooky call to go with its diminutive size. However, despite its name, this particular owl does not screech. It produces sounds more like a whinny or a trill.

These nocturnal birds of prey are more often heard than seen. They camouflage themselves in tree nooks or dense cover throughout the day. They often forage from their perch, eyeing prey before swooping down to capture it from the ground or other foliage.

At CROW, an adult eastern screech owl was admitted from Cape Coral. The owl was found stuck to a glue trap, and the finder was able to free it from the trap. In its struggle to be freed from the glue trap, the owl had damaged its primary feathers and other feathers, and its feet were covered in glue. The veterinary team at CROW used chinchilla dust to gradually remove the glue over the course of about five days. The use of chinchilla dust is a reliable product for CROW veterinarians.

“It is easily applied and binds to and dries adhesive substances on the feathers, allowing it to be manually removed without the use of a soap, which would require the stress of bathing the animal, and also avoids the potential for hypothermia following a bath with soap,” said Dr. Robin Bast, CROW staff veterinarian, about chinchilla dust. “We typically reach for chinchilla dust first when it comes to glue removal.”

Dr. Bast said glue was covering both of the poor owl’s feet as well as the feathers along the right wing. After a tense five days for the patient, the glue was fully removed, and the owl was moved to an outdoor enclosure until its feather condition improved. 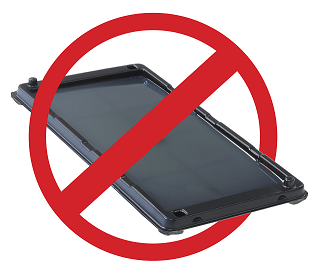 “The screech owl was able to perch comfortably after removal of the glue from its feet, and it was given pain medication for mild discomfort related to struggling to free itself from the adhesive,” said Dr. Bast. “After its initial stay in ICU (intensive care unit) to remove the majority of the adhesive, it was moved to an outdoor enclosure until it can molt its feathers.” That feather-growing process may take some time.

“The feathers on the right wing are damaged from the glue even though that has been removed. If the bird does not go into a natural molt soon, a procedure may be performed to pull some of the feathers and encourage new ones to grow back in faster. This owl needs perfect feathers in order to have silent flight for hunting,” said Dr. Bast. “Prognosis remains guarded as it will be quite some time until the owl’s feathers grow back in weeks to months.”

The use of glue traps is often called one of the cruelest methods of killing animals. Many innocent critters get caught up in glue traps, even though they are not the intended target.

“Glue traps often catch animals other than those it was intended for. Additionally, they are not a humane method of pest control as the animals caught up in them often struggle for prolonged periods of time, becoming further injured and often leading to fatality,” said Dr. Bast.