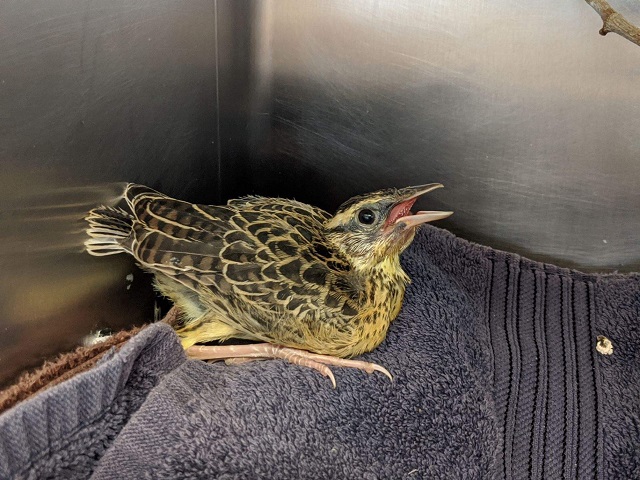 The eastern meadowlark (Sturnella magna) is mainly known for its flutelike whistle and not so much for its ability to be a ground nester. Strangely, this songbird is not in the lark family, but rather it’s a member of the blackbird family, which includes orioles.

At CROW, a fledgling eastern meadowlark was admitted from Cape Coral after being found in the middle of the street. Due to its land preference, a juvenile meadowlark can be confused with a young bird that has fallen from a tree.

“Meadowlarks are different from other birds because they do not nest in trees. Instead, they form woven nests with grass growing from the ground,” said CROW Wildlife/Admissions Specialist Morgan Hester. “Some nests can even have roofs and tunnels – they can be quite elaborate. A female may even find a hoof print that she uses as the nest which has good foliage coverage around it.”

While there were no reported significant injuries, it was noted that the bird was open mouth breathing without wheezing or crackling in the lungs, likely from the stress of being captured and handled. The bird was placed into an oxygen chamber for a single day to help with its breathing patterns.

“Sometimes the stress of being caught or chased can lead to increased respiratory effort,” said CROW Rehabilitation Manager Breanna Frankel. “(The patient) settled down relatively quickly and began to eat almost instantaneously. We introduced natural grasses to its cage when admitted, to provide a natural environment, and he/ she has been playing with the provided grasses ever since.”

Rehabilitation staff continue to monitor the patient, feeding it nine times a day every one and a half hours. Once old enough and able to fly, the bird will be released.

“The young begin to leave their nest just 12 days after hatching, and the parents follow them around supplement feeding them until they are able to find enough food on their own. At this young age, they are primarily eating insects,” said Hester. “Due to being raised partially in captivity, it will take longer for this one to become independent since we can’t actively teach it how to be a meadowlark like the parents can.”

Frankel said the eastern meadowlark is an infrequent patient at the clinic with seven so far in 2020, only three last year and zero in 2018.

“(While) they are commonly seen in Southwest Florida, our clinic just doesn’t get many admitted,” she said.

While a finder believes he/she is doing the right thing, a phone call should be made before other action.

“If you encounter a bird that nests on the ground, it should be in the nest until it is able to hop around quite easily. If you are unsure whether a baby is in trouble, please call your local rehab center and confirm it needs medical attention,” said Hester. “A majority of the babies that are found on the ground are supposed to be there, based on their development. Be cautious when approaching any animal nest, as female meadowlarks may actually abandon the nest if forced off.”

Meanwhile, this CROW patient appears to be feeling better.

“We are offering about eight supplement feeds a day, and it enjoys eating worms,” said Frankel. “He/she has started making short flights in the indoor cage it lives in. Once it’s off supplemental feeds, it will be moved outside for some flight conditioning. It will be released back into an area with a good meadowlark population.”