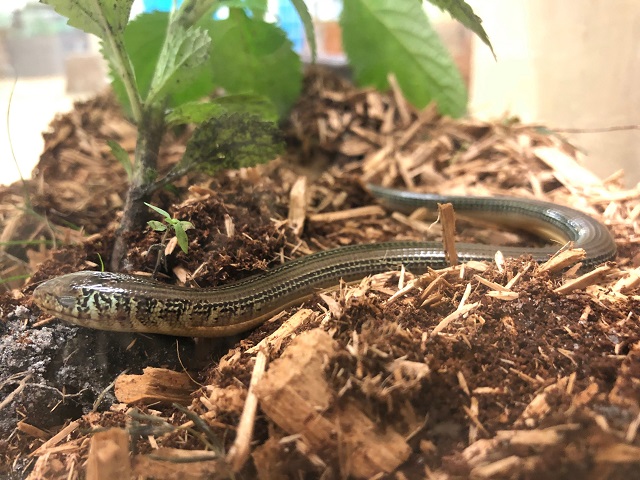 The eastern glass lizard ((Ophisaurus ventralis) is a legless lizard that is often mistaken for a snake. It is nonpoisonous and regarded as the most secretive of its species and difficult to see, even though it can reach a length of 42 inches.

Unlike snakes, glass lizards have visible ear openings, eyelids, small scales on their bellies and are less flexible. They are so-called due to their fractured planes in their tails that “break” if their tails are grabbed.

“Glass lizards do look very similar to snakes but there are a couple key differences for the ease of identification,” said CROW Rehabilitation Manager Breanna Frankel. “Glass lizards cannot unlock their jaw like snakes can to swallow whole prey; their mouth only opens as far as the jaw allows. They also have small ear hole openings, which snakes do not have, that are located right behind the eyes on either side of the head. Glass lizards also have eyelids and you can see them blink – snakes do not have eyelids. The most telling characteristic is the ability for glass lizards to drop their tail when they need to evade predators. They can drop it into several smaller segments, like glass breaking, and those pieces will continue to wiggle around to confuse predators.”

At CROW, an eastern glass lizard was admitted from Cape Coral after it was found with a swollen, bleeding mouth and a swollen eye. Upon examination, the patient was reported to have head trauma and a possible jaw fracture, but the cause of the injuries was unknown. Using radiographs, veterinarians determined that the hard upper palate of the jaw was fractured but not displaced, meaning the bones were aligned and would be able to heal properly.

“If there is, in fact, a fracture, there is no way to repair it with surgery or bandaging. The only thing we can do is offer the patient pain medications and cage rest so the body can heal itself over time,” said Frankel. “There was no evidence of puncture marks or anything else that would obviously tell us it was attacked by a predator. This type of trauma could have been caused by some type of blunt trauma like being hit by a bike or a rock, but we truly don’t know the cause of the injury.”

For nutrition, the patient is being offered a variety of worms and crickets but remains uninterested, possibly due to pain. It is also getting a liquid form of nourishment through a tube.

“You can tell that side of the face is hurting, and the lizard is very cautious about moving its mouth. That’s why we have been tube-feeding it, very gently, to ensure it gets enough calories while it is healing,” said Frankel. “We will continue to offer food every day, but likely will not see it start to eat until swelling decreases a bit. This could be a few days or a few weeks, there is really no way of telling this soon.”

After a few more days of care, the patient is reported to be more comfortable, but the eye remains swollen and its interest in food has not changed.

“Some of the swelling has gone down, but the left eye continues to stay mostly closed. It seems to be doing okay, getting daily pain medications and tube feeds every couple days to ensure appropriate calories, but is not eating on its own yet,” said Frankel. “It is too soon to determine any release information as the prognosis is still very guarded.”