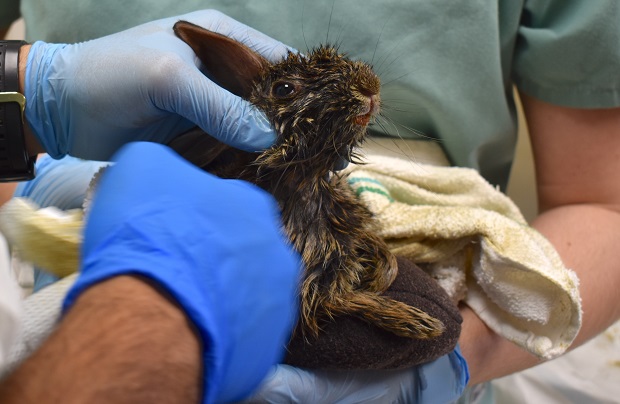 The eastern cottontail rabbit is the most common of its species, which can be easily identified by its cotton ball tail. While these mammals would rather live on the outskirts of populous areas, such as farms, fields and other rural places, they do adapt to more urban spots. Eastern cottontail rabbits often forage at night. These herbivores like to look for garden vegetables to fill up on. During the day, they tend to hide in thicker brush or meadows. Like other rabbits, they will zigzag away from prey and can reach up to 20 miles an hour if they need to.

At CROW, an adult eastern cottontail rabbit was admitted after becoming stuck in motor oil as a Porsche dealership in Fort Myers. The workers at the dealership saved the rabbit from a bucket of motor oil after it fell in attempting to get out of the garage. The quick-thinking workers immediately washed the rabbit in dish soap. Upon intake, the rabbit has a cool temperature and was thin.

“A rectal temperature was not obtained upon intake, however, the rabbit was cool to the touch,” confirmed Dr. Mariah Lancaster, CROW veterinary intern. “This was likely due to the patient being wet with oil, soap and water- making it less able to thermo-regulate, control its own temperature. The patient was also in shock, which causes the vessels closest to the surface of the skin to shrink down, making the skin feel cool.”

“It was deemed that another bath (warm water and liquid soap) would take place the following morning, as rabbits can suffer spontaneous heart attacks if too stressed. A water pick was considered to help lift the oils from the skin and fur; however, this method was not able to be attempted.”

The rabbit was placed into oxygen chamber before an intravenous catheter was placed. Artificial tear ointment was also administered to flush any oil from the eyes.

“Immediately upon intake, the eyes were flushed and examined for ulcers, which were not seen. Artificial tears were then used every eight hours to prevent oil from irritating the eyes,” said Dr. Lancaster. “The patient markedly improved throughout the course of the initial treatment. An IV catheter was placed, and warmed fluids were given to help warm the patient and fight the shock the patient was suffering from. In oxygen, the patient began to stand and was eating on it own.”

Unfortunately, the rabbit quickly went down hill health-wise and died in its cage overnight. “The most likely, and suspected. Cause of death following this kind of exposure to motor oil, a hydrocarbon, is severe aspiration pneumonia. The chemicals interfere with the natural function of the lungs, both causing chemical irritation and inflammation- pneumonitis- and interfering with the lungs’ ability to clear themselves of contaminating materials,” said Dr. Lancaster. “Rabbits are also extremely sensitive to the ingestion of improper substances, and the rabbit may have experienced GI stasis- a lack of forward gastrointestinal motility- that contributed to its untimely passing.”