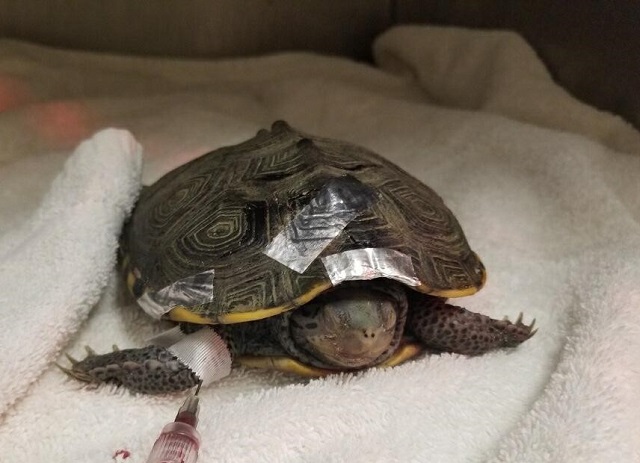 The diamondback terrapin (Malaclemys terrapin) normally resides in brackish coastal tidal marshes of eastern and southern parts of the nation. It is sonamed due to the multiple “diamond-shaped” rings on its carapace.

At CROW, a female diamondback terrapin was admitted after being hit by a car while crossing the road in Matlacha. She reportedly sustained a fracture to her carapace as well as one along her bridge (area that connects top and bottom shell) and plastron (bottom shell).

“The original injury was fairly extensive, causing severe head trauma and the fractures. The terrapin received pain medication first, then underwent testing -– bloodwork and x-rays,” said Dr. Mariah Lancaster, CROW veterinary intern. “A sedated procedure was performed which allowed us to flush the blood and road debris from her wounds prior to shell fixation. One of our rehabilitation staff recently taught us a technique learned at the National Wildlife Rehabilitators Association annual conference, which allows us to use foil tape and superglue to secure the shell rather than the more invasive screws and wire. Due to her small size and the freshness of the fractures, she was an ideal candidate for this technique.”

The x-ray revealed the patient was also gravid, or carrying eggs, with six eggs visible on the radiograph. She had lost so much blood from her injuries that she became very anemic. A blood transfusion was needed to help her and her future offspring.

“It is difficult to know exactly how long she has been developing her eggs, however, diamondback terrapins typically average three weeks in between laying each clutch of eggs. Based on our ability to see the eggs on x-rays, there has to be minerals (calcium) already within the shell, which means she is on the closer side to laying the eggs,” said Dr. Lancaster. “The shell was repaired the same day the patient arrived at CROW, but a few days were necessary to arrange the donor for the transfusion.” 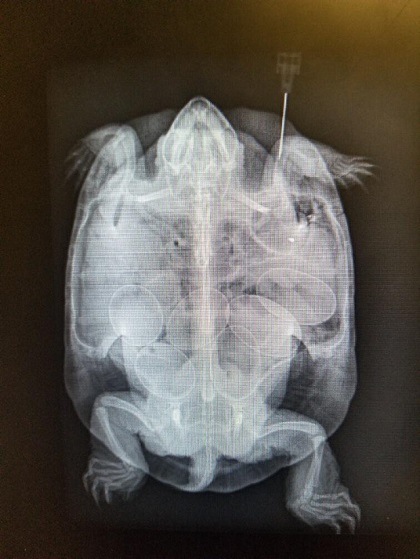 The turtle is currently recovering because of Jordan Donini, a herpetologist and professor of biology at Florida SouthWestern State College Collier campus. The blood for the transfusion was able to be donated by his terrapin, who was rescued by authorities from a poacher that had removed her from the wild for the illegal pet trade.

“Jordan is a former CROW staff member and has remained close with the staff. We reached out to Jordan knowing he has some ambassador terrapins at the moment,” said Dr. Robin Bast, CROW staff veterinarian. “According to Jordan, this terrapin in particular was rescued from someone who tried to take it from the wild and sell it to a pet store.”

Since it was not able to be determined where the blood donor came from, she could not be released to the wild and is now an ambassador for Jordan’s research and education group, The Southwest Florida Turtle Project.

“The Southwest Florida Turtle Project was started with three main goals in mind: to study and elucidate the life history of lesser known/less revered species of turtles in the Southwest Florida Peninsula – specifically species of conservation concern such as diamondback terrapins, and Florida box turtles,” said Donini. “(The other goals are) to educate locals on current conservation and environmental issues revolving around turtles, other species and the habitats they live in; and to train and encourage students to take part in active wildlife/conservation research. You can follow the project and the work we do on our Instagram page (@swfl_turtle_project).”