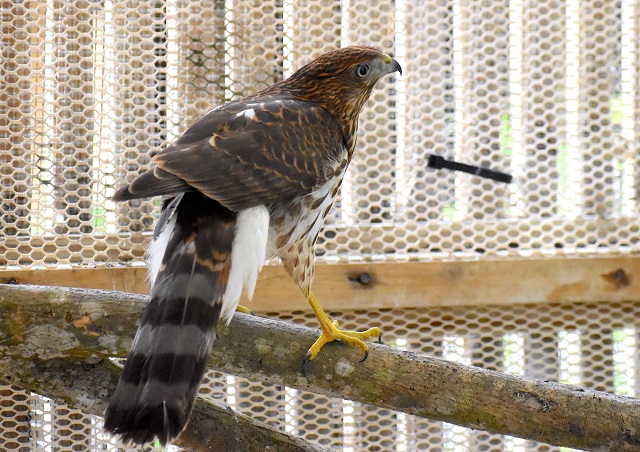 The Cooper’s hawk (Accipiter cooperi) is mediumsized with a grayish colored back, reddish-barred chest and red eyes. Its bill is not prominent but has a sharp hook.

Cooper’s hawks are said to be very skillful fliers, possibly the most skillful flier in the bird world. They are also known as fierce hunters and will attack smaller birds at bird feeders. If one takes up residence near your feeder, it is recommended to take it down for a few days to allow the hawk to move on.

At CROW, a Cooper’s hawk was admitted from Cape Coral after it was found at the base of a tree unable to move. Upon intake, it was suspected that the patient may have spinal trauma due to the minimal use of its legs. After full radiographs were taken, there were no signs of fractures, but the patient had enlarged kidneys likely due to dehydration or possible kidney disease.

“The enlarged kidneys are not directly contributing to the hydration status of this patient, but may be an indication of underlying kidney disease,” said Dr. Robin Bast, CROW staff veterinarian. “Because the kidneys live near the spine, if they become enlarged in severe cases, the concern is they could press on the spine and result in neurologic signs like weakness in the legs. If a patient is severely dehydrated, the kidneys may appear brighter on an x-ray.”

The patient was given fluids and was started on physical therapy to help the movement in its legs.

“Physical therapy initially for this patient involved putting its legs through normal range of motion exercises since it was too weak to do this itself. As the patient gained back muscle strength and started trying to stand, it was encouraged to grip a perch repeatedly. Once it started standing for brief periods, its body weight was supported as it was encouraged to take steps across yoga mats on the porch until it was walking well on its own. At that stage, it was moved to an outdoor enclosure to start attempting flights and encourage it to do its own self-physical therapy,” said Dr. Bast.

“You want to minimize stress since they’re wild, so we will often cover their head with a raptor hood to help calm them down while doing physical therapy. Once they are at the stage of needing assistance to walk, staff wears protective gloves due to the bird’s sharp talons. Once the bird has graduated to an outdoor enclosure and does its own physical therapy, we use GoPro cameras to monitor the patient’s progress over time.”

After a few weeks of physical therapy, the patient was doing much better and regaining movement in its legs, and was moved outside for “day camp.”

“The patient spends the daylight hours in an outdoor enclosure to encourage normal behavior and increased activity level at a time where it can be closely monitored by staff if it needs assistance,” said Dr. Bast. “Overnight, it is brought back inside the hospital for rest.”

Since the patient has been going outside for day camp, it has become more active, making small flights and has been regaining strength.

“This hawk is continuing day camp since it only eats consistently indoors overnight right now. We are continuing to use GoPro cameras to assess its progress with physical therapy and assess ability to regain full function,” said Dr. Bast. “We continue to assess this patient daily. Although it has made a lot of progress from intake when it couldn’t stand at all, it appears to be plateauing or not making continued improvements. Time will tell if this hawk is able to regain enough function in its legs that it will be able to hunt on its own and survive in the wild.”