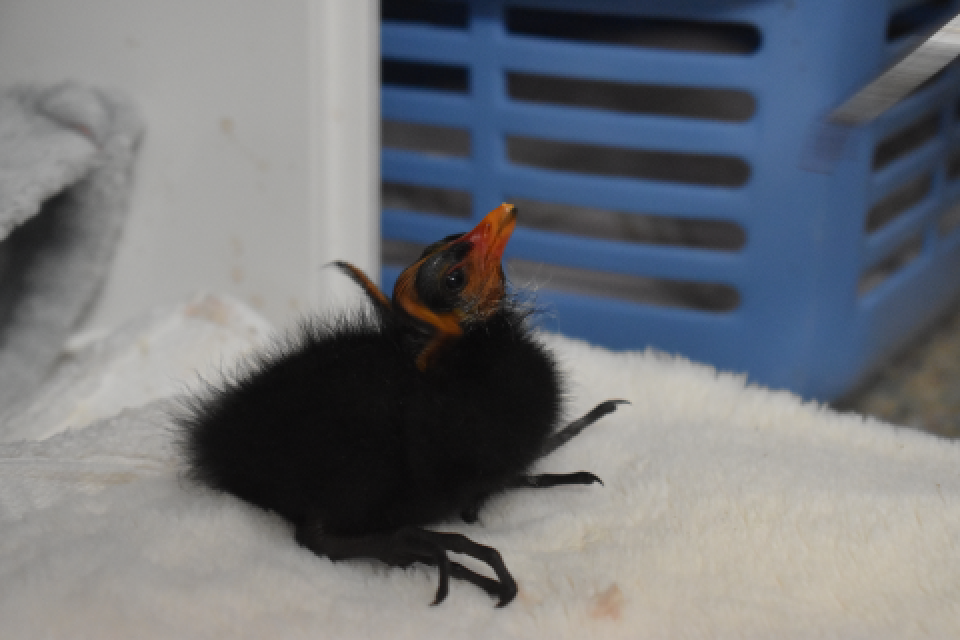 The common gallinule (Gallinula galeata) is a groundliving rail bird that is medium-sized with long legs and toes. It is mostly charcoal gray colored with a white stripe down its side.

Adult gallinules will have a bright red “shield” on their foreheads with a red bill that has a yellow tip. Young birds lack the red shield and bill.

Gallinules tend to spend a lot of time in marsh waters and are known to swim like ducks. However, they can walk atop floating vegetation due to long and slender toes.

At CROW, a hatchling common gallinule was admitted after being found alone in Lakes Park in Fort Myers. Upon examination, the young bird appeared to be clinically healthy.

“This gallinule chick has no issues of concern. It was just found alone and was slightly thin but otherwise healthy,” confirmed Breanna Frankel, CROW rehabilitation manager. “There was an attempt to locate the family within 24 hours of admit to the clinic, but we were unsuccessful. If we had found parents, we would have to be very cautious to return the chick to the right family or there is a chance it would be abandoned or even injured in the process.”

Due to the patient being a grounddwelling bird, the hatchling was not considered to have fallen from a tree nest.

“Many common gallinules will nest on floating aquatic ‘mats’ of vegetation near shoreline. If that is the case, it would not have ‘fallen’ since they tend to nest at ground level,” said Frankel. “There are cases where they nest in shrubs or bushes but a fall for this chick is unlikely.”

While the baby gallinule is deemed healthy, it will still need nutritional care during its stay at the clinic.

“This chick is tong-feeding blood worms every hour from 7 a.m. to 7 p.m. currently,” said Frankel. “At around a week old, it will begin to forage and start the process of self-feeding. We will add in various dietary options like shrimp, snails, vegetation, seeds and insects.”

The chick will be raised at the clinic or transferred to a clinic with other gallinules if another reuniting attempt is not successful.

“Gallinule chicks can walk within a day of hatching since they are a precocial species. They are able to fully self-feed after only a few weeks and gain full flight around 6 weeks old. If the chick continues to stay at CROW, it will not be released until it is fully flighted, which would be around 6 weeks of age,” said Frankel. “We do not have any other gallinule chicks, so we will be seeking transfer to a center that has other chicks for this one to be raised with.”

Veterinarians suspect the hatchling was potentially abducted or orphaned.

“When someone finds a baby on the ground alone, it is best to call CROW before taking matters into your own hands. In many cases, we can talk the finder through locating the baby’s family and reuniting them successfully,” said Frankel. “Bringing a baby to CROW should be the very last option as their parents will raise them to be more successful than we will. Their parents often teach them crucial survival skills that we can’t mimic in captivity, so leaving them with their parents – when possible – is the best thing for them.”