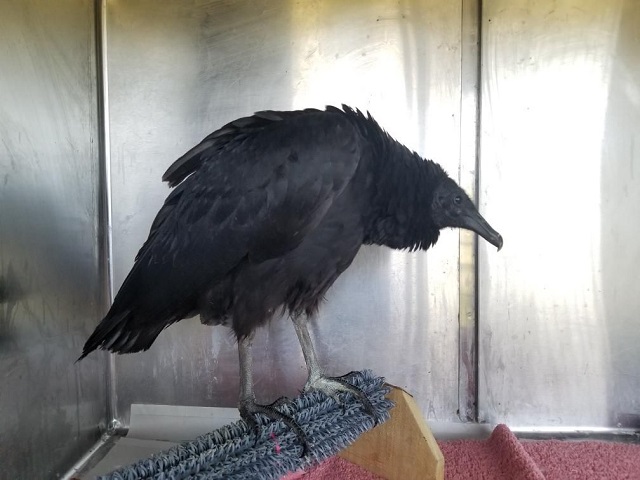 The black vulture (Coragyps atratus) is a large raptor with a small, featherless head and a strongly hooked bill. It is mostly black with some white on its wingtips.

You can differentiate the black vulture from its flight buddy, the turkey vulture, which has a red head and feathers with a browner tint. Both can be found on the sides of highways or major roads pecking away at road kill.

At CROW, a juvenile black vulture was admitted from Cayo Costa after it was seen on the beach wet and unable to fly. Upon examination, small abrasions were found on the vulture’s head and blood was noted to be seen on the eye. X-rays were taken, which revealed to the veterinarians there were nine shotgun pellets in the bird’s head, neck and left wing, indicating that the bird had been shot. Thankfully, there were no broken bones. Some of the pellets that were close to the surface were able to be removed from the patient’s wing.

“Both pellets over the left wing were very superficial and were removed. There was also a pellet below the chin that was removed. We were unable to palpate the remaining pellets, so they were left in,” said Dr. Sasha Troiano, CROW veterinary intern. “We were unable to palpate the pellets over the head, which is why they were not removed. The risk of digging around looking for them was higher than just leaving them in. If they had been more superficial and easily palpable, they also would have been removed.” 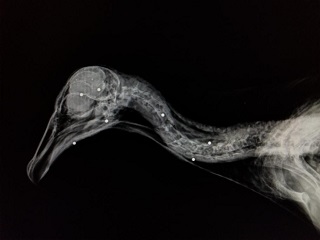 Dr. Troiano stated the pellets in the patient’s head will not affect its mobility. “The remaining pellets should not affect the bird’s ability to do well moving forward. There is always a small chance the pellets will migrate and could potentially cause damage, depending on where they end up migrating. But again, the chance is fairly low. Most likely, they will stay where they are and become walled off by the body and will not cause further damage.”

The vulture received pain and antiinflammatory medication and continues to receive supportive care.

“Currently, the patient is receiving basic supportive care – pain medication, antibiotics, hydration and food. If recent bloodwork looks good, the pain meds and antibiotics will be discontinued, and the patient will be moved outside for further rehabilitation,” said Dr. Troiano. “The fact that the patient is a juvenile probably helps in this case. The patient has a mild left head tilt, and also has damage to the inside of the left eye. Vision is decreased in the left eye. The fact that the patient is a juvenile will likely make it easier to adapt to these changes. Given the life history strategies of this species, the patient does not need perfect vision, therefore the damage to the left eye is not a cause for euthanasia.”

Once Tropical Storm Eta passes and pending bloodwork results are positive, the young black vulture will get exercise and should be closer to release.

“The patient is doing extremely well, and should make it to release barring any unforeseen complications,” Dr. Troiano continued. “If the patient flies well and continues to eat, release will be coordinated. It is important that this bird be released exactly where it was found in order to reunite with its family, which is important for its survival in the wild.”