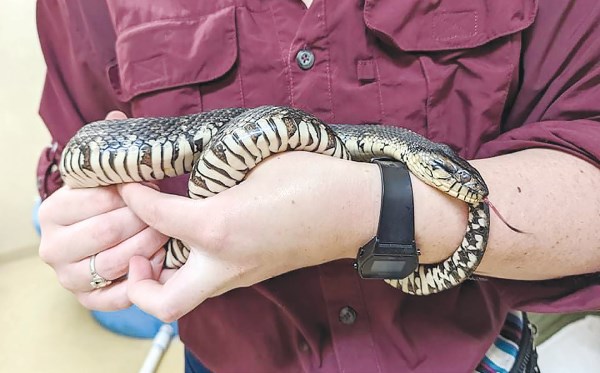 The banded water snake (Nerodia fasciata) is a nonvenomous snake that is not known to be a threat to humans or pets, but it will bite to defend itself. Often called the southern water snake, this reptile has a brown and grayish back with reddish brown crossbands.

At CROW, a banded water snake was admitted after being found lethargic, with a possible eye injury. Upon examination, veterinarians were able to determine the snake had a retained spectacle on its right eye during a shedding process.

“When snakes shed, they shed all the scales on their body. In snakes, the spectacle – or eyecap – is the scale that covers the eye. When that scale doesn’t come off with the rest of the snake’s shed, it is considered to be retained,” explained CROW Rehabilitation Manager Breanna Frankel. “It can sometimes cause vision deficits which can lead to malnourishment and pain.”

“Typically, we avoid pulling the retained spectacle off as it could cause damage to the surface of the eye,” said Dr. Robin Bast, CROW staff veterinarian. “In this case, the daily eye soaks – warm water soaked cotton ball compresses on the eye to loosen the spectacle – are not working, likely due to underlying infection. Surgery is planned for tomorrow morning (Tuesday) for a wedge resection of the spectacle to allow us to more easily administer topical medications directly into the eye. We hope that after this procedure and by continuing eye soaks, the rest of the spectacle will fall away and underlying infection will resolve.”

Snakes have been known to “outgrow” their skin. It could take some time for the patient to complete its shed.

“Typically, when snakes begin a shed, the whole process may take up to two weeks,” said Frankel.

“They utilize extra energy to shed their skin, and often don’t want to eat or be active during this time,” added Dr. Bast.

The patient may require help with feeding to keep its fuel level up for the energy it needs.

“It was started on antibiotics and is receiving supplemental feeds to ensure enough calories to heal properly. The snake enclosure is being misted daily to provide appropriate temperature and humidity for shed to occur,” said Frankel. “The snake had been offered a number of ‘normal’ prey items, including small fish, but has not eaten on its own yet. It is supplement fed two to three times per week with a liquid diet through a tube.”

This patient will continue to receive treatment with hopes that it will eventually be cleared for release.

“It will likely be several more weeks before we know the outcome in this case,” said Dr. Bast. “If all goes well, we should be able to release the snake within the next month, once the infection has cleared up. In a worst case scenario, we might have to surgically remove the eye, but the snake should be able to survive in the wild with one eye. We are keeping our fingers crossed for a full recovery and release – with both eyes.”