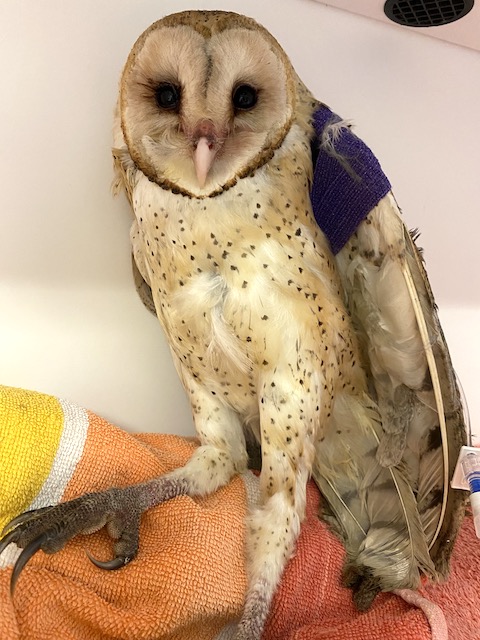 SANIBEL, Fla (November 9, 2020) – The Clinic for the Rehabilitation of Wildlife (CROW) admitted an adult barn owl, its 5,000th patient of the year, from Clewiston, Florida, on Friday, November 6.

As the 5,000th patient, this barn owl marks a milestone for patient admissions to CROW. So far in 2020, the wildlife hospital is seeing an approximate eight percent increase in patient totals over last year’s record number of patients at 5,336. Overall, patient admissions have increased by more than 50 percent since 2014.

“With all that has happened in 2020, it’s certainly no surprise that we are once again surpassing our record for patient admissions,” says Alison Charney Hussey, Executive Director for CROW.

When a good Samaritan found this adult barn owl in the middle of a highway, it was clear something was not right. The finder gathered up the owl and took it to the Clewiston Animal Control who then transferred it to CROW’s wildlife hospital on Sanibel for treatment. Upon arrival, CROW’s veterinary staff examined the owl, noting it was thin with evidence of trauma including bruising on its right wing and a corneal ulcer of the right eye. The owl also exhibited a dull mentation, meaning it was not very responsive to its surroundings.

“Head trauma can cause a life-threatening increase in pressure around the brain which often manifests as this decreased awareness of surroundings,” says Dr. Robin Bast, CROW’s staff veterinarian. “These findings are consistent with blunt force trauma such as being hit by a car.”

The veterinary team immediately placed an intravenous catheter to provide fluids and medication to reduce any swelling around the brain. They housed the owl in a specialized cage that provides supplemental oxygen and applied topical medications three times a day to treat the corneal ulcer.

“The morning after being admitted, the owl was slightly more alert, but remained quiet,” says Dr. Bast. “We provided another round of fluid therapy and by the third day, the owl had stabilized. We moved it out of the supplemental oxygen and took a full set of radiographs which thankfully did not show any fractures.” 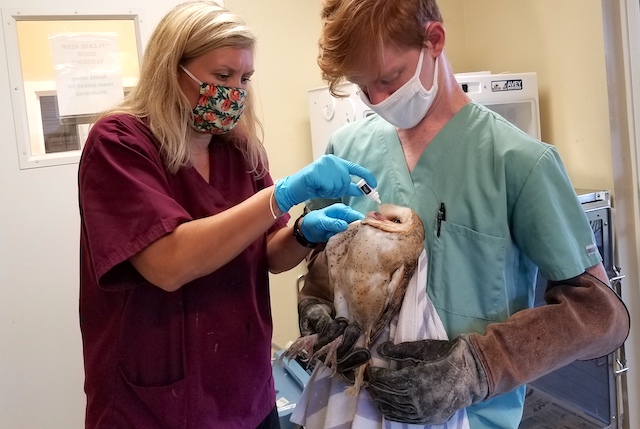 The owl remains in the intensive care area of the hospital. Veterinarians removed the catheter but continue to provide pain medication. Since it is not eating on its own, the team provides assisted feedings three times a day. CROW’s staff is optimistic the owl will continue to gradually improve. In many cases, birds with head trauma recover within seven to ten days of treatment. Once the corneal ulcer is fully healed and the owl is eating on its own, it will move to an outdoor flight cage where, if it shows it can fly well with no vision impairment, it will be cleared for release.

Barn owls, found on six continents, are one of the most widely distributed birds but are not seen as often as you would expect. Because these birds are nocturnal, they spend the daytime hours roosting and in the nighttime hours they hunt for the rodents that make up the bulk of their diet. A Floridians best friend if you have a rodent problem, adult owls can consume up to 1,000 rodents a year.

Throughout the month of November, you can support CROW’s efforts to save this barn owl and their other wildlife patients by dining out! Visit or carry out from any of the 31 Sanibel and Captiva restaurants participating in Taste of the Islands - Reimagined and order the selected menu item(s). A portion of each item sold is donated to help sick, injured and orphaned animals in CROW’s wildlife hospital. Purchase a Passport to track which restaurants you’ve visited, vote for your favorite restaurant to win the “People’s Choice Award”, and be entered to win vacation stays, jewelry, gift certificates and more. For more information about Taste of the Islands - Reimagined, click here!

If you would like to make a donation to CROW, please visit www.CROWClinic.org/donate/donate-today or you can donate through CROW’s Facebook page.