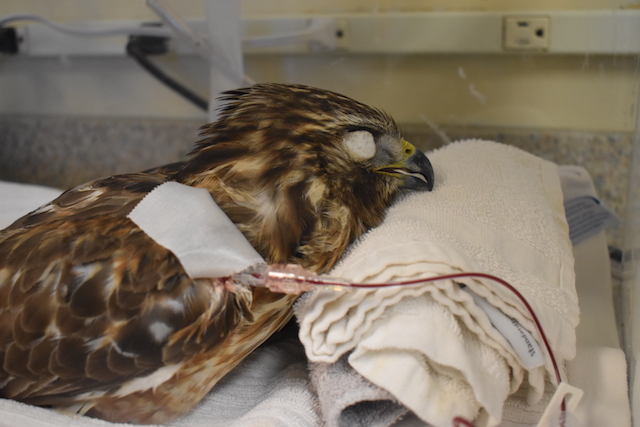 SANIBEL, Fla (December 9, 2019) – The Clinic for the Rehabilitation of Wildlife (CROW) admitted its 5,000th patient of the year on Friday, December 6. The patient, a red-shouldered hawk, was discovered by workers laying mulch, sitting under a hedge and unable to fly.

Red-shouldered hawks have frequented the wildlife hospital in 2019 with 94 individuals admitted. Reasons for admission vary but include being hit by a car, electrocution, rodenticide poisoning, falling from the nest and gunshot wounds. 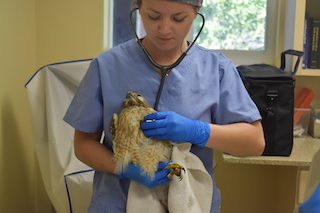 The hawk was rescued by a CROW volunteer and transported to the wildlife hospital on Sanibel Island. Dr. Megan Cabot, a veterinary intern, admitted the hawk and performed an exam. She found it to be very weak and lethargic, but with no obvious trauma injuries. The hawk was placed in a supplemental oxygen chamber and later, an intravenous catheter was placed to provide the hawk with fluids.

“When we placed the catheter to administer fluid therapy, the hawk’s blood did not clot and continued to bleed, a classic sign of anticoagulant rodenticide poisoning,” said Dr. Cabot. “We immediately began working to perform a blood transfusion.”

A transfusion of healthy blood along with providing the patient with vitamin K helps to restore the ability to clot and potentially saving the animals life. Anticoagulant rodenticides, or rat poisons, prevent the blood from clotting normally and cause an animal that has ingested a toxic amount to slowly bleed to death. Rodents that ingest the poison often become disoriented or lethargic as they are dying and become easy prey for hawks, owls and other predators, passing the poison through the food chain.

Thankfully, another red-shouldered hawk patient that is currently recovering from a broken wing, but otherwise healthy, was able to donate blood to help the newly admitted hawk. Its condition remains heavily guarded and will need time and further treatment to see if it will fully recover. 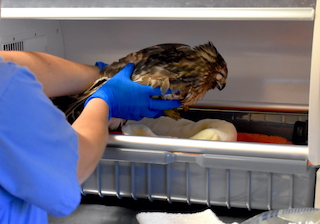 As the 5,000th patient, the hawk marks a milestone for patient admissions. So far this year, CROW has seen approximately an 11 percent increase in patient totals compared with last year, a year which saw unprecedented numbers of sea turtles and birds affected by red tide. Since 2014, patient admissions to the wildlife hospital have increased by more than 40 percent.

“The number of patients admitted to our hospital continues to grow year after year,” says Alison Charney Hussey, executive director for CROW. “We continue to need the support of our community. As a nonprofit, we rely on grants, donations from the public, money raised through our Visitor Education Center and our fundraising events to ensure we are able to provide top-notch medical care to each and every animal that comes through our doors.”

If you would like to make a donation to CROW, please visit www.CROWClinic.org/donate/donate-today.

About Clinic for the Rehabilitation of Wildlife (CROW)

Established in 1968, the Clinic for the Rehabilitation of Wildlife (CROW) is a teaching hospital saving the sick, injured and orphaned native and migratory wildlife of Southwest Florida and beyond.  Through state-of-the-art veterinary care, public education programs and an engaging visitor center, CROW works to improve the health of the environment, humans and our animals through wildlife medicine. For more information, or to plan your visit, go to www.crowclinic.org. If you find an animal that is in need of help, call (239) 472-3644 ext. #222.