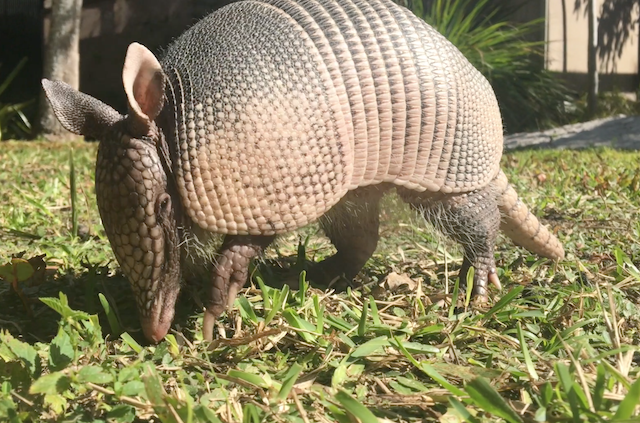 There are approximately 20 species of armadillo around the world. Only one, the nine-banded armadillo, is native to North America and seen as a patient at The Clinic for the Rehabilitation of Wildlife (CROW). The term “armadillo” means “little armored one” in Spanish, and refers to the presence of bony, armor-like plates covering its body. They are hardy animals, and their range has been steadily spreading across North America.

Part of their success in colonizing new areas is due to their ability to cross bodies of water. For larger expanses, the armadillo is capable of increasing its buoyancy by swallowing air. This inflates its stomach and intestines which acts as a flotation device while it swims across. It can also walk underwater for short distances by holding its breathe for as long as six minutes.

Nine-banded armadillos are nocturnal and spend their waking time burrowing or feeding. They are omnivorous feeders and use their keen sense of smell to track down almost 500 different foods. Most are insect pests that humans would rather not have around their houses such as beetles, cockroaches, wasps, fire ants, termites and spiders. When startled, armadillos have a tendency to jump straight up in the air, sometimes up to four feet. This defense makes them poorly suited to life along America’s roadways, and they are often victims of vehicle collisions. 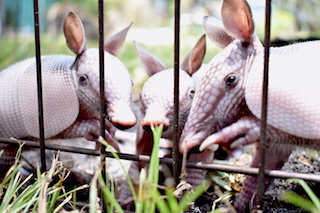 Female armadillos almost always give birth to four identical quadruplets through a process called polyembryony. This process, in which one fertilized embryo splits into two or more, can also occur in humans producing identical siblings. At birth, the protective armor of the offspring has not yet hardened, and the young are extremely vulnerable to predation.

A fear of leprosy commonly gives people a bad impression of these unique creatures. Nine-banded armadillos are the only other animals besides humans known to host the particular bacteria which causes it. They may be more susceptible than other wild mammals because of their lower body temperature of 91 to 97 degrees Fahrenheit. Clinical signs of infection are similar to humans with skin lesions most often being found on the extremities. 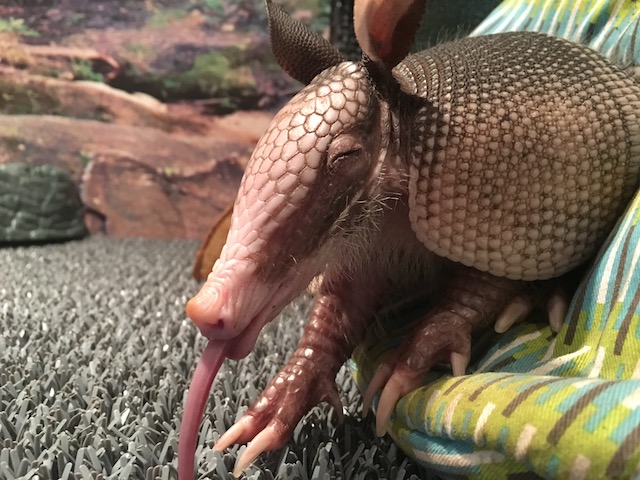 Human leprosy, an infectious skin and peripheral nerve disorder also known as Hansen’s Disease, is caused by the bacteria Mycobacterium leprae. Scientists believe that humans were likely the original carrier that transmitted it to armadillos when Europeans came to North America over 500 years ago.

The bacteria can be transmitted to humans indirectly through soil frequented by armadillos and contaminated with the organism. Direct contact with infected armadillos or ingestion of its meat can also spread the bacteria; however, cases of humans getting leprosy by handling armadillos are extremely rare. Up to 95 percent of the human population is actually genetically resistant to contracting the disease. While it still affects 250,000 people annually worldwide, only about 150 to 250 Americans are infected each year. In Florida, there have only been 64 confirmed cases over the past three years. 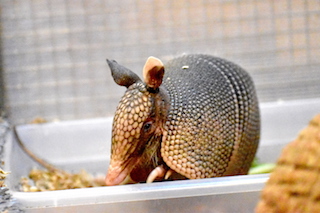 These days, Hansen’s Disease is highly treatable and not nearly as contagious as once believed. If you are worried about your companion animals being infected with leprosy by an armadillo in your yard, there is no need. The bacteria that causes it in pets is different from the bacteria that causes it in humans (Mycobacterium simia in dogs and Mycobacterium lepraemurium in cats).

Even though the risk of becoming infected with leprosy is low, it’s best not to handle them. If you find an injured or orphaned armadillo, call a wildlife center, such as CROW, before you help it.

Visit the Education Center at the Clinic for the Rehabilitation of Wildlife on Sanibel to learn more about these awesome, armored animals and meet Billy, a nine-banded armadillo and resident educational Animal Ambassador. Click here for our Education Center Hours!