A red-tailed hawk with a mission 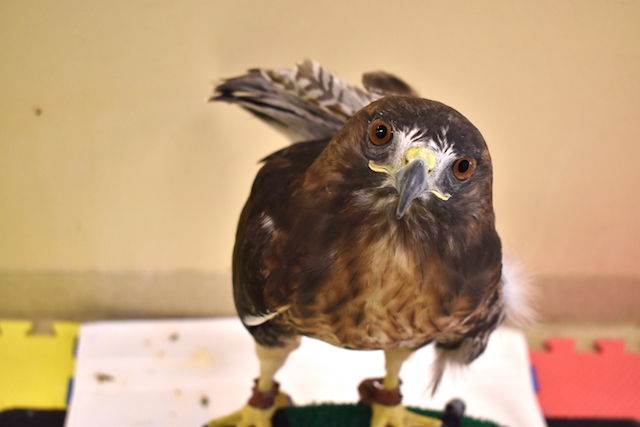 The red-tailed hawk is one of North America’s most common hawk species. They have very broad, rounded wings with a short, wide tail. The tail feathers, that the hawk derives its name from, are usually pale below, but a cinnamon-red on top. They are often spotted near open fields perched atop fenceposts or trees along the edge.

At the Clinic for the Rehabilitation of Wildlife (CROW) on Sanibel, one red-tailed hawk, named Talon, has a very important job to do.

Talon first arrived as a patient at the CROW hospital in 2014 as a juvenile. He had suffered an unknown trauma that left him with a broken left wing. Despite medical treatment, the wing was unable to be corrected rendering him unable to fly well enough to hunt on his own. Unable to survive in the wild, Talon became one of five Animal Ambassadors at CROW that helps teach folks of all ages about birds of prey through on and offsite educational programs. 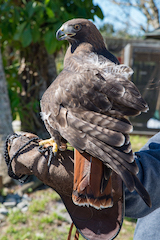 These members of the education team help CROW to foster positive interactions with wildlife and the public in a monitored environment. Education improves a person’s awareness of these animals’ intrinsic value and increases their appreciation for the connection between humans, animals, and the environment.

When not entertaining visitors at one of CROW’s daily presentations or Wildlife Walk guided hospital tours, Talon spends time training with the rehabilitation staff, saving lives of hawk patients with blood donations or relaxing in one of the outdoor rehabilitation enclosures. Staff use positive reinforcement by providing Talon’s favorite treats such as mice, rats or chicks when good behaviors are performed. 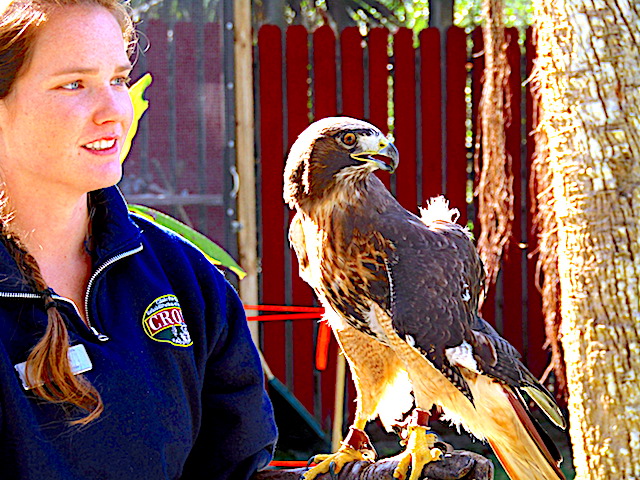 Although Animal Ambassadors have been conditioned to be more tolerant of human contact, it’s crucial to understand that these animals are not domestic pets. They are wild and still maintain fears and anxieties as if they were in their natural surroundings. Proper safety must be exercised at all times, so ambassadors are only handled by CROW’s properly trained staff, students and volunteers during programs.

Learn more about Talon or one of the other Animal Ambassadors by attending a daily presentation at CROW’s Visitor Education Center offered Monday through Saturday at 11 a.m. and 2 p.m.

For a complete schedule of upcoming presentation topics which includes Birds of Prey, click here.

Check out Talon's Enclosure on our Live Webcams!